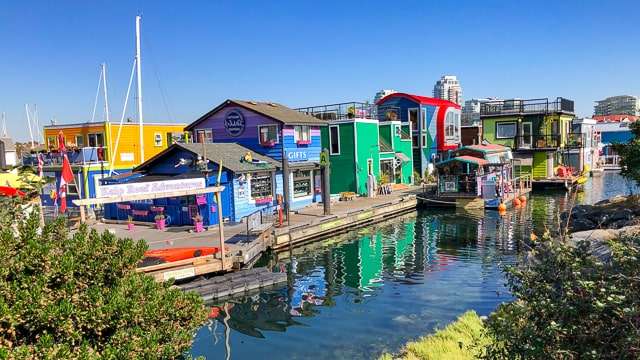 The capital city of British Columbia, Canada, is Victoria, one of the oldest cities in the Pacific Northwest. Located on the south shores of Vancouver Island, Victoria is named after Queen Victoria and was settled by the British in 1843. Amazingly, there are still quite a few historic buildings in Victoria, with the most famous being the Parliament Buildings and the Empress Hotel. As well, Victoria’s Chinatown is known as the second oldest in North America.

Due to its mild climate, Victoria is known as the “City of Gardens” and takes pride in the overabundance of flowers that bloom during the year, including crocuses, daffodils, cherry trees, and early blooming rhododendrons.

With its rugged coast, lakes, sandy beaches, and museums, tourism is prevalent in Victoria year-round. Located downtown, the Inner Harbour offers whale watching tours, boating and is the entry port to cruise ships.

After leaving the ferry terminal at Swartz Bay, why not detour into Sidney’s quaint seaside town, only a 5-minute drive away. You will find tons of parking along the roads and down to the pier. Take a stroll along the paved walkway and watch people fishing off the dock and setting crab traps into the ocean below.

Are you looking for freshly caught seafood? Head down to the pier. If the opportunity occurs, why not take a moment to chat with a resident. You might find some unknown local places to visit.

Did you know that Sidney has a sea glass beach? You can spend hours skimming the sand for different colored sea glass and listening to the excitement of everyone, including young and old. Check out some of the shops and bookstores, and then treat yourself to a meal in one of their restaurants.

Located only 15-minutes from the Swartz Bay Ferry Terminal, at the Saanich Peninsula base, is the famous Butchart Gardens in Brentwood Bay. In 1909, Jennie Butchart began dreaming of recreating a sunken garden where the limestone quarry used to be. Jennie completed her open garden in 1921. In 2004, the Butchart Gardens became a National Historic Site of Canada.

They have one million visitors annually that come to visit this fantastic work of art. There are various gardens to explore—Sunken Garden, Rose Garden, Japanese Garden, Italian Garden, and the Mediterranean Garden.

Give yourself 2—4 hours to explore the entire site. If you love taking photographs as I do, take your time, and do not forget to smell the flowers. The plants and flowers are changed for every season so that guests can see different blossoms each time they visit.

Located in downtown Victoria, Beacon Hill Park is a popular park for both tourists and locals. Some of the amenities include trails, two playgrounds, a waterpark, a petting zoo, and beautifully landscaped gardens, to name a few. You can also check out the scenic views of the Strait and the Olympic Mountains of Washington.

In 1882, the Province of British Columbia granted 75-hectares (185.3 acres) to the City of Victoria held in trust. This beautiful park defined the very essence of Victoria and was designated a municipal heritage site in 2009.

The park is also a place of historical, cultural, and sacred significance to the Lekwungen People, now known as Esquimalt Nation and Songhees Nation.

Did you know that there was a castle in downtown Victoria? Craigdarroch Castle was constructed by a coal baron named Robert Dunsmuir during the reign of Queen Victoria. In 1992, the Castle became a National Historic Site of Canada. Over the years, the Castle has painstakingly been restored to give visitors a glimpse of life in the 1890s.

The Castle weaves a fascinating tale of a compelling family – their achievements, relationships, and even quirks.

Do you love history? Why not take the 60-minute tour of the Castle. The inside of the Castle is stunning. The guide walks you through each room and shares incredible family stories, with detailed facts about each space.

Hatley Castle is located just outside of Victoria in Colwood. In 1908, James and Laura Dunsmuir hired Samuel Maclure to design their family retirement home. James also requested that he wanted the exterior to look like a medieval castle. It took 18-months to build, with the Dunsmuir’s officially moving in on May 1, 1910. It was the largest private residence on the west coast. The Castle overlooks beautiful gardens, with a stunning view of the sea.

Make sure you explore the Dunsmuir Room museum, with relics of family life, history of the Castle and gardens, and stories about the staff and laborers who lived and worked on the estate.

Located in downtown Victoria, the Royal BC Museum was established in 1886. The museum consists of the Province of British Columbia’s nature and human history as well as the British Columbia Provincial Archives.

The museum is a must-see for every age group. There is plenty to see and explore while visiting the museum. Make sure you give yourself lots of time. After exploring the museum, why not visit the province’s largest IMAX screen.

Located in downtown Victoria, the Parliament Buildings have spectacular views of the Inner Harbour and the Empress Hotel. It is home to the Legislative Assembly of British Columbia.

Authorized by an Act of the provincial legislature in 1893, the new Parliament Building’s construction was built first, following a fire in 1957. Designed by the architect Francis Rattenbury, the newly built Parliament Buildings were officially opened on February 10, 1898. Free guided tours are offered throughout the year.

While visiting downtown Victoria, the beauty of the Empress Hotel immediately stands out. Recognized as Canada’s national historic site in January 1981, the Empress Hotel is a luxury waterfront hotel. It was opened on January 20, 1908, and was built by the Canadian Pacific Railway as part of its hotel network. Since opening, the hotel has undergone two expansions – the first from 1910 to 1912 and the second expansion in 1928. The hotel also experienced a significant restoration between 2015 and 2017. The hotel celebrated the restoration efforts on June 28, 2017.

Located a short distance from Victoria’s Inner Harbour is Fisherman’s Wharf Park. If you are driving, it is only a 5—10-minute drive from the downtown area, with ample paid parking available. Another alternative is to walk along the Inner Harbour’s pathway and watch the boats and floatplanes coming and going in the harbour. If you are hungry, there is an excellent variety of food kiosks to check out, including pizza, ice cream, fish & chips, and so much more. On the eastern side of the pier, you can check out the float homes. There are three different businesses to help you for those of you who want to check out the tours while visiting. Give yourself lots of time to explore.

Interested in taking a tour to witness the beauty of watching whales in their natural habitat? There is a locally owned and family-operated business, Eagle Wing Tours, that has amazing tours. They have a Whale Guarantee Program as a customer service commitment and promise to fulfill your dream of seeing whales (orca/killer whale, humpback whale, gray whale, and minke whale) in their natural habitat.

Victoria’s Chinatown is the oldest in Canada and one of the oldest in North America. When the Chinese immigrants traveled to Canada more than 150 years ago, they brought their culture and traditions with them. They came to chase the riches in the Fraser Canyon and up north to Barkerville. There were more opportunities to work on the goldfields and the construction of the Canadian Pacific Railway. Victoria became the entry point for Asian immigration to BC.

Chinatown stands out in the downtown area. You will see the embellished decorated arch, Gate of Harmonious Interest, marking the entrance to Chinatown’s center on Fisgard Street. Note the bold colors of red and gold, recognizable architecture, and business names written in Chinese on shop windows. In 1995, Chinatown became a designated National Historic Site.

You can spend hours exploring the narrow alleys, unique shops, and plenty of restaurants. Ensure that you visit the shops on Fan Tan Alley, as it is one of Canada’s narrowest streets.

The Victoria Harbour, including the Inner Harbour, is known as one of the most stunning harbours in the world. This harbour is a section of the traditional territory used and inhabited for thousands of years by First Nations. The Victoria Harbour is the hub of downtown Victoria, with spectacular views of the Empress and the Parliament Buildings. There is a winding pathway along the water for those who want to enjoy a nice leisurely walk.

During the summer, the harbour is the go-to place to experience the festivals, shows, music, and craft markets. You will also find whale watching and ecotourism businesses, float planes, and the International Ferry terminal. The Victoria Harbour Ferry offers a water taxi service to those wanting to explore a little further than the Inner Harbour.

Only 50-minutes from downtown Victoria, the Sooke Potholes Provincial Park is a popular place to get back to nature. A series of deep, naturally sculpted, and polished rock pools formed during the last ice age millions of years ago along the Sooke River. The potholes water has a beautiful greenish-blue hue. It travels through sets of waterfalls into deep clear pools, offering an excellent display of swimming holes.

Nestled within the forest are remnants of the abandoned Deertrail Resort. There is fencing surrounding the ruins, and it is not open to the public, although there are some spots along the fence that people can sneak into. Along with the powers of nature creeping in to reclaim its hold, there is an assortment of colorful artwork and graffiti. You can see the outlines of stairs and walls along the cliff at one of the viewpoints. Albert Yuen and his wife had a dream. Unfortunately, the Yuen’s eventually ran out of money and investors. The partially built complex was never completed, and fell into despair. The Land Conservancy and Capital Regional District Parks bought the site.

Located on Vancouver Island, Victoria is one of the oldest cities in the Pacific Northwest. It is steeped in history, culture, and nature, bringing unique opportunities to visit castles, Chinatown, and other historical buildings.

Victoria offers a little bit of everything. You could spend time in the museums, the Empress, or the Parliament Buildings. It is also a great place for those who prefer to take a leisurely walk along the Inner Harbour, rent kayaks, or go whale watching.

Victoria is a place to explore whatever your interests are.