You are here: Home / The United States / Virginia / 11 Best Things to Do in Wytheville, Virginia 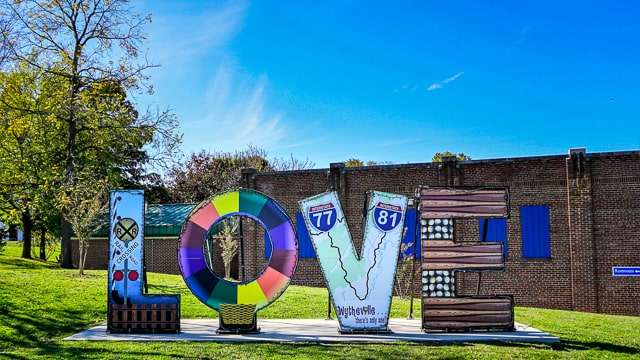 Wytheville, Virginia, is a small town with a big appetite for sharing its attractions with visitors. Boasting a population of fewer than 10,000 people, it will amaze you with its variety of activities and its stunning natural beauty made possible by its setting in the Blue Ridge Mountains.

1. Get to Know a First Lady

I arrived in Wytheville knowing very little about First Lady Edith Bolling Wilson. After spending time in her birthplace museum and other places in town, I have new knowledge and appreciation for this remarkable woman.

You will find less than a dozen homes or historic sites open to the public throughout the country dedicated to telling the stories of former First Ladies. Besides the one in Wytheville, only three are actual birthplaces: Abigail Adams, Lucy Webb Hayes, and Mamie Dodd Eisenhower. There is something very special about standing in the room where this exceptional woman was born and hearing her story. Many believe she was the first female President of the United States. I urge you to visit to learn the reason.

William and Farron Smith own the two-story building at 145 East Main Street in Wytheville and established the Edith Bolling Wilson Birthplace Foundation in 2006. They have made an impressive start on this important project with many plans for the future.

2. Take in a Musical and Dinner

It is hard to imagine that a town with such a small population could support a dinner theatre bearing such an unusual name. Still, it has done so for 20-years. The license plates in the parking lot indicate a far-reaching appeal for the six shows a year and the four-course meal that is served at Wohlfahrt Haus.

The theatre is a result of a life-long dream of owner Peggy Sutphin, whose ancestors migrated from Germany in 1750 with the surname of Wohlfahrt. German cuisine is not served for the performances because the aim is to please as many as possible, but there is a German restaurant adjacent to the theatre. Those who plan to visit Wytheville should check out the website to find the dates and times of current shows and make reservations in advance.

One of the first startling sights you’ll find as you stroll down Main Street is the 30-foot-long pencil attached to Wytheville Office Supply. It is a notable landmark and serves as the starting point to the town’s annual Big Pencil to Big Walker Charity Ride. Other stores will catch your eyes, such as Glitz n Glam Boutique and The Farmer’s Daughter.

Be sure to find the 100-foot mural painted by artist Andrew Williams. It depicts the life of native daughter, Edith Bolling Wilson.

As you enter 1776 Log House Restaurant, you can see the original cabin built in 1776 by a man named Will. We know very little about this man except that he had to leave his project to fight in the Revolutionary War. An additional section was added to the cabin in 1804, and another still in 1898. If only those walls could talk.

The menu at 1776 Log House is relatively small, but every item has been carefully chosen. The homemade bread to begin your meal can be followed by light corn fritters and honey. Stuffed squash is a highly recommended side to accompany your entrée. Everything I sampled was wonderful, and I give the ambiance and the food my enthusiastic approval.

5. Take in the Far-Reaching View

Big Walker Lookout is referred to as “Virginia’s oldest, privately-owned attraction.” The scenic mountain drive to 8711 Stoney Fork Road will bring you to a place that is one part a location for a panoramic view, one part country store filled with jams, jellies, toys, books, and best of all, ice cream, and one part music venue (on weekends from May to October). The 100-foot observation tower is said to provide views of five states, and in all seasons of the year, that can be spectacular.

The phrase “purple mountain majesties” could well have described the scenery around Wytheville. When you add that to rolling hills and bubbling springs, you get an outdoor lover’s paradise with numerous recreational opportunities for exploring by bike or on foot. Big Walker Mountain Trail, New River State Park, and Crystal Springs have well-marked trails ranging from easy to challenging. The most challenging trail is called the Boundary Trail, which climbs to an elevation of 3300-feet and is 8.5-miles long. The Walker Mountain Trail is 15.5-miles long and ends just a mile from the Appalachian Trail.

7. Try Your Luck Fishing for Trout

The lakes and streams near Wytheville are teeming with Brook, Rainbow, and Brown trout that can likely be found at Cripple Creek, Dry Run Creek, and New River Trail State Park. Anglers may choose to wade, canoe or kayak to their favorite spots. If you’re unfamiliar with the area, there are guides and outfitters ready to show you the way and provide equipment. Choose whether you want to spend a half-day, full-day, or overnight and make sure someone has a frying pan ready when you return.

8. Get to Know Some Locals

Two museums on the same block in Wytheville furnish rich insight into the people and happenings that have contributed to the town’s heritage.

At the Thomas J. Boyd Museum, you can see Wytheville’s first fire truck and numerous displays of farming equipment, Civil War artifacts, and photos from bygone years. You will learn about Thomas Jefferson Boyd, known as the “Father of Wytheville,” and the 1950 polio epidemic that swept through Wytheville in what became known as the “Summer Without Children.”

The Haller-Gibboney Rock House Museum was the home of Dr. John Haller, Wytheville’s first resident physician. The period furnishings and original artifacts, along with medical records and supplies from the 1800s, provide an important glimpse into the past.

Skeeter’s has been serving hungry diners continuously since it opened in 1925. It is located next door to the Edith Bolling-Wilson Birthplace Museum and across the street from the Bolling-Wilson Hotel.

The vintage diner sold hot dogs for a nickel when the first customers walked through the door. The popularity (and the price) of the Skeeter-dogs grew and now draws customers from all over the world. These hot dogs earned a place on the Top Hot Dogs of America list. The basic Skeeter-dog comes with mustard, onion, and chili, but 10 additional toppings are available. The menu is simple, and the prices are friendly. It is a must-taste piece of the town’s culture.

10. Immerse in Lavender and Butterflies

Beagle Ridge Herb Farm is the result of the passion and hard work of owner Ellen Reynolds. Since 2001, she has dug, planted, replanted, built garden walls, fashioned pathways, and experimented, all the while realizing that she is a teacher at heart who wants to share what she has discovered. The farm specializes in lavender but also includes a walk-through butterfly house, a gift shop filled with homemade products, a tearoom, a place for school groups and others to visit and learn, and a photographic backdrop for weddings and other special events.

The drive to Beagle Ridge may seem long but is still considered to be a part of Wytheville. You are sure to see lots of wildlife during your drive, such as deer and wild turkeys. The plants at the farm are dormant during late fall and winter, but spring and summer bring a burst of lush greenery and the magnificent smell of that lavender.

11. Spend a Night or Two in Wytheville

The Bolling-Wilson Hotel is a lovely hotel with 30 well-appointed guest rooms has a number of significant elements connected to First Lady Edith Bolling-Wilson. The fact that she took care of her grandmother’s 26 canaries, had a fondness for bourbon, and considered orchids to be her favorite flowers are tidbits of information that spill over into the décor and the logo. This namesake boutique hotel is directly across the street from the birthplace museum.

The receptionist staff will be happy to point out the ways her story has been incorporated. If you stay or if you dine at the on-site restaurant, Graze on Main, order their signature carrot cake for dessert. When President Woodrow Wilson and Edith married, carrot cake was their chosen wedding cake flavor.

If you prefer, there are a number of brand-name hotels and eateries, particularly where Interstate 77 and Interstate 81 meet as you come into Wytheville.

A few other possible places to explore are the Cobb Hill Alpaca Farm, the Fort Chiswell Animal Park, and Virginia’s smallest church. It holds 8 people, and its doors are always open.

The people of Wytheville have a welcome sign on the doors of their town and would love to have you visit. Speaking of “LOVE,” don’t leave without posing for a photo with one of the three L-O-V-E signs found in the attractions listed above. They are a part of the LoveWorks project used to promote the state’s tourism motto – Virginia is for Lovers.