You are here: Home / The United States / Washington / 11 Best Things to Do in Port Townsend, Washington With stunning scenery, Victorian architecture, a working seaport, a coffee shop with a resident golden retriever, and an amazing ice cream parlor, Port Townsend should definitely be on your list of places to visit.

First named Port Townshend in 1792, the city was incorporated in 1852 and by the end of the 19th century was recognized as an important seaport. Today, the quaint seaport is home to almost 10,000 people who take great pride in their hometown.

The best way to see the town is to rent a car (if you didn’t drive there) and do a circular reconnaissance around town while stopping at each place that piques your interest. Then, drive up and down the streets to admire the architecture and explore the community. By the end of the trip, you will want to live there!

There are many fun things to do in Port Townsend but let’s start with Manresa Castle. The castle began life in 1892 as a private residence. Over the years it has been a vacation destination for nuns, a training college for priests, and finally, a hotel. It is also reportedly haunted, especially rooms 302 and 306.

Upon entering the castle, you will face an ornately carved lion posted on a banister. The steps ahead lead upstairs to a huge ballroom. Back down to the lobby and immediately to the left is a parlor where settees beckon visitors to sit and rest their weary feet; there are also books to read, music to be heard, drinks to soothe, and a beautiful, warm room to comfort visitors. If you head downstairs, you’ll be greeted by a large breakfast room that is reminiscent of a speakeasy.

There is also a restaurant and lounge on the other end of the castle which looks warm and inviting with a menu to make your mouth water. Unfortunately, it was closed for renovations when we visited.

This organization is well known for its community involvement, inclusiveness, and helpfulness in times of great need. Members are former military and are deeply involved in community projects to help Port Townsend be a better place for everyone. Stop in for a drink and say hello to the locals.

This place is amazing! The oldest operating grocery in Washington State, the market has been the center of Port Townsend since 1895. Offering an abundance of tasty bites, local goods, and international delights, it’s like heaven.

To top it off, there’s a popular sushi restaurant on the floor above called Ichiba. Doesn’t get much better than that.

The beautiful setting of Fort Worden will make you stop in your tracks. Being a military brat, I can’t recall any of our posts looking remotely like this. It covers several hundred acres with hiking trails, beaches, Point Wilson Lighthouse, and views to die for. Not to mention the deer that make an appearance almost daily. You’ll likely see surfers sharing the water with floating seagulls on the point.

Also along the drive through the fort are the Marine Science Museum and Battery Kinzie, a bunker. Both are very cool sites to explore.

Heading back towards the officer’s quarters, you can make a stop at Taps for a bite. Side note–An Officer and a Gentleman was filmed here.

5. Taps at the Guardhouse

The guardhouse on Fort Worden was built in 1904 and provided accommodations for soldiers who were considered in breach of military discipline, mostly because they caroused a little too heartily along the wild and wooly River Street.

Today, it’s a place to sit down, relax, and unwind. The brewhouse atmosphere offers regionally brewed beer, cider, wines, and spirits. You can sit inside a cell to have your drinks and food…as long as you behave. They offer appetizers as well as full plates, so whether want to snack or have a full meal, go for it. It’s all tasty. It’s a fun place to sit, take a load off, and get your fun on, lest you upset the proprietor, and force him or her to lock you in a cell.

The old Lincoln School, located on the campus of the current Port Townsend High School, is listed on the National Register of Historical Places.

While it is historically significant for its direct contribution to educational development in Port Townsend, and a fine example of the federal relief programs of the Great Depression, it is also recognized for another important reason…its magnificent gardens provide food to all of the district schools.

This is a source of local pride for Port Townsend’s residents. This is another great example of local resourcefulness in an effort to bring together a community and lend a helping hand to make sure good, healthy food is served in the school lunch rooms.

There are two cool things about this cafe. First, it’s inside the Jefferson Healthcare Hospital and gets rave reviews regularly. Second, it’s the first in the state to utilize fresh, locally-resourced ingredients.

Executive chef and food service director Arran Stark gives food preparation demos and film cooking videos. The menu itself includes dishes that you don’t typically see on a hospital menu, if at all.

A particularly attractive benefit for anyone, including staff, is that you can order a meal one day and pick it up for lunch or dinner the next. It’s a nice service for people that are too exhausted to cook after a long shift or a particularly trying visit with hospitalized family or friends.

Stop by for lunch or dinner…you will not be disappointed.

Nine hundred dollars in 1890 is the equivalent of $25,625.37 in today’s dollars. The fire truck that is housed in Fire Bell Tower of Bell Tower Park cost $900 in 1890. Inside the tower, the ringing of the 1500-pound bell signaled the community there was a fire to be fought.

The 75-foot tower still holds the bell today and is the only wooden bell tower still standing in the entire country. It is designated as a historical landmark and is preserved by the Jefferson County Historical Society and the City of Port Townsend.

Every decade the community comes together to raise funds for the tower’s restoration, and it is worth the effort. The tower is surrounded by gorgeous Victorian homes and overlooks the ferry terminal in Admiralty Inlet and Port Townsend Bay.

Every Christmas the tower is decorated by the community and becomes a gathering place for the townsfolk to celebrate the season. What better way to celebrate community than to be in the presence of a 130-year-old local icon.

Upon entering the Northwest Maritime Center, the first thing you see are boats in various stages of construction. They look much bigger up close than they do in the water.

We spoke with a local who volunteers on weekends so the center can stay open for tourists; he told us that their goal is to engage and educate people about traditional and contemporary maritime life, adventure, and discovery.

You can go upstairs to read more about the history of the museum and view artifacts.

There are workshop classes for youth and adults at the skills center. They even have a class called Race Like A Girl. They do it for the love of boats and to serve the local community as well as the maritime industry. They believe the sea is the most powerful teacher.

With the name beginning with Elevated how could this ice cream parlor and candy store not be incredible?

Elevated Ice Cream Co started serving ice cream from an antique Victorian elevator cage in 1977, hence the name. They also came up with the motto “Lift Your Spirits!” as an elevator pun.

All of their ice cream is homemade with fresh, locally-sourced ingredients to make sure the flavors are the best…like Swiss orange chocolate chip for example. Just the name made me want to buy it!

The recipes come from a family friend who had an ice cream shop in Seattle for 40-plus years. They have adapted some of them but remain true to the most popular flavors. They also still use the techniques of their family friend. Why mess with a good thing?

Make a point of stopping by for at least a taste. I promise you will want to buy every flavor in the place. Plus, it’s not far from the Palace Hotel in case you eat too much ice cream and need to rest.

You are probably thinking to yourself…industrial park? Really? I swear this is one of the coolest places in Port Townsend. Not only does it house Admiral Boat Supply which carries parts for every single boat ever made, but it’s also home to the Port Townsend Shipwright’s Co-op. This place is amazing!

I spent the better part of the day walking around, talking to people, looking at boats old and new, and watching boats being taken out of and put back into the water by this huge monster machine on wheels.

Then I was hungry, so I stopped in at the Blue Moose, a restaurant that you can’t walk past without your nose leading you back to some of the wonderful smells wafting out of the door.

Continuing to the marina with a full stomach, there were boats of all sizes docked and looking beautiful. The water was like glass, so the reflections were incredible. Fast forward a few more hours and I was hungry again, so I ended up at Sunshine Coffee.

Being of the Starbucks generation, I wasn’t prepared for the homey, friendly atmosphere that greeted me. The owner’s dog is a rather large golden retriever named Arlo and is very sweet. The coffee was yummy, the atmosphere was comfy, and the cinnamon roll was fabulous.

All in all, the Port Townsend Industrial Park really isn’t industrial at all. It’s like a little city within a city. If you’re at all enamored of boats, water, food, or coffee, just go. It has a great vibe and you’ll be glad you did.

There is so much more to Port Townsend than outlined here, with its rich seaport history, culture, and great food, but there’s only so much time in each trip to experience it all.

Try to get a little taste of everything. You certainly won’t be sorry you decided to spend more time with the locals and learn what it’s like to live in a working seaport. Whatever you do and wherever you end up, you are sure to make another trip here soon. It’s that good. 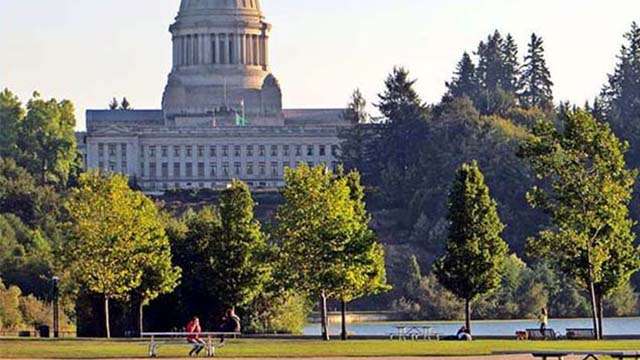