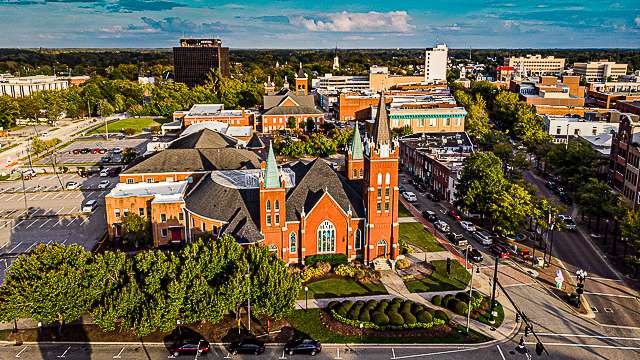 — FAYETTEVILLE, NORTH CAROLINA — If you’ve never visited Fayetteville, you’re in for a treat. In this dynamic North Carolina city of over a quarter-million residents, you’ll find a metropolis that is on the move while maintaining an air of small-town Southern charm.

Located in North Carolina between the Coastal Plain and Piedmont, Fayetteville makes itself at home on the 202-mile-long Cape Fear River that flows into the Atlantic. Historically, Fayetteville’s location was strategic. Today, it is an ideal destination for a weekend getaway, family vacation, or deep dive into history.

Settled in 1783, Fayetteville was the first city to be named for Gilbert du Motier, AKA Marquis de Lafayette, hero of both the American and French Revolutions. It is the county seat of Cumberland County. The city is probably most famous for its proximity to Fort Bragg, a major US Army installation. It is also home to some heavy hitters in the world of military contractors, including Lockheed Martin, Boeing, Northrop Grumman, and more. All these help spur Fayetteville’s economy but don’t generally draw visitors.

Here are a few of Fayetteville’s fascinating and delightful attractions.

Conveniently located in historic downtown Fayetteville, ASOM is both a tribute to and a comprehensive history of US Army Airborne and Special Operations troops. The museum’s life-size multi-media exhibits take visitors on a time trip in chronological order from 1940 to the present.

Beginning with the first parachute jumps through World War II, Korea, Vietnam, and more recent conflicts, The tour puts you in the middle of the action.

Take a close-up look at heavy equipment once used in combat, including a fully restored WACO CG-4A glider, an M551 Sheridan Tank, and a rotor from the Super 61 Helicopter salvaged from the ill-fated mission in Somalia. And if you have a strong stomach, there’s the Pitch, Roll & Yaw motion simulator that gives you a small taste of modern special operations training.

ASOM is fully wheelchair accessible. Allow two to three hours to tour the museum and grounds. Admission is free, but donations are greatly appreciated. The simulator, however, will set you back $10.

2. Take a Selfie with Iron Mike

Before you leave the Airborne & Special Operations Museum, pose for a photo with the 15-foot World War II-era Airborne trooper holding a Thompson submachine gun. Known as Iron Mike, this imposing sculpture was commissioned to honor the bravery of those who are “always watching, waiting, and alert.” Erected in 1965, Iron Mike’s original home was Fort Bragg; he now stands in front of ASOM in Fayetteville on rocks retrieved from the first Airborne training jumps.

After your Iron Mike photo op, take a moment to reflect upon Constant Vigilance, the world’s first memorial to Special Operations K9s killed in action. The lifelike canine is positioned facing Iron Mike, making one wonder who’s guarding who.

Inscriptions at the base of the sculpture include the names of Special Operations Forces K9s who died in the line of duty. These four-legged heroes are remembered for saving countless lives.

A short stroll across the parking lot from the Airborne & Special Forces Museum will bring you to North Carolina Veterans Park. The site is the first state park dedicated to living and deceased military veterans from the five branches of the United States Armed Services.

The park provides an ideal spot for a picnic with a purpose. Colorful gardens, smooth walking paths, water features, and symbolic monuments and sculptures make for a relaxing respite surrounded by tributes to America’s military. Particularly fascinating is the Oath of Service Wall, which displays the hands of North Carolina veterans cast in bronze.

Be sure to stop in at the visitors center, where you can view videos on military history. Look up, and you’ll see a chandelier made of 33,500 dog tags. The Service Ribbon Wall displays every service medal awarded since the Civil War.

But perhaps the most moving exhibit is the wall containing rows of dog tags engraved with the names of every member of the military from North Carolina who was killed in action from World War II to today. The left-hand rows, which represent World War II, contain the greatest number of dog tags. The numbers decrease with each row and conflict, but the representation of lives lost, and unrealized potential brings home the devastating cost of war in a simple but highly effective way.

For a delightful oasis, a mere two miles from Fayetteville’s downtown area, Cape Fear Botanical Garden is the perfect place to spend an hour or an afternoon enjoying the fresh air and beautiful blooms. Since 1989, this 80-acre gem tucked between the Cape Fear River and Cross Creek has offered educational programs for locals and visitors of all ages, cultural events, and quiet spots for relaxation and reflection.

Drink in colors and fragrances emanating from profusions of camellias, day-lilies, and many more stunning florals. Enjoy shade gardens, a “Butterfly Stroll,” and a “Children’s Garden” with elevated walkways that will keep the little ones happy and occupied. Another impressive aspect of the Cape Fear Botanical Garden is its commitment to making gardening accessible to every ability level. For example, the therapeutic horticulture program uses raised garden beds that enable participants with disabilities to learn how to grow and nurture plants.

If you haven’t brought a picnic, the Garden View Deli has you covered with tasty, fresh artisan sandwiches, salads, and soups. In addition, they make a generously piled Ruben that will keep you going the rest of the day.

Cape Fear Botanical Garden is wheelchair accessible and easy to navigate for individuals with limited mobility.

If you’re looking for a museum that encompasses Fayetteville’s history, offers guided tours, and will keep everyone in the family engaged, the Fayetteville Area Transportation and Local History Museum checks all the boxes. The museum is a piece of Fayetteville’s history in and of itself, as its home is a beautifully restored 1890 Cape Fear and Yadkin Valley Railroad Depot.

The museum’s exhibits are arranged on two levels and present artifacts that span the millennia from the area’s pre-history through the early 20th-century. Take a trip back in time in the model train room, the steamboat interactive, and an impressive reproduction of a station agent’s office.

But wait, there’s more. The annex located next door to the museum contains a treasure trove of vintage automobiles, a recreated 1920s gas station, and a Silsby steam pump engine from the 1880s. Museum exhibits also explore the timeline between Native American trails and steamboats and trains. The importance of Cross Creek and Campbellton’s early trade communities and the development of the plank road system connected Fayetteville to other towns throughout North Carolina.

The museum is fully wheelchair accessible. There is no charge for museum tours.

Delve into 400-years of Southern North Carolina history by visiting three attractions on one site. The Museum of the Cape Fear Historical Complex includes a museum, Arsenal Park, and the 1897 E.A. Poe House.

The museum brings the rich history of the region to life through its exhibitions, living-history programs, demonstrations, and more.

Fayetteville is where North Carolina ratified the United States Constitution. It is where the Cape Fear River became instrumental in connecting the region to the rest of the country through trade. And it is where the American Civil War took its heavy toll on the city and surrounding areas.

Permanent exhibits fill the museum’s two floors with stories of life in North Carolina through the centuries. From the time when Native Americans lived on the land, to the early settlers, and all the way up to a replica of an early 20th-century general store, the history of the region is artfully presented with care and accuracy.

In truth, there’s not much to see at Arsenal Park except ruins and a tower. It is nonetheless a significant piece of Fayetteville’s history. Constructed in the 1850s, the US government had chosen Fayetteville as the site for a military arsenal. When North Carolina seceded from the Union in 1861, the local Confederates occupied it. They put it to use for the rebel cause. In 1865, General William Tecumseh Sherman’s Union troops raised the arsenal to the ground. The only evidence of its former existence is a pile of rubble and a hexagonal metal outline representing the northwest tower.

The 1897 Poe House is named for its first occupants, brick company owner, E. A. Poe, his wife Josephine, and their eight children. The guided tour of the home will take you back in time to life during the first two decades of the 20th-century. See how the house was furnished, learn about family life during this period in history, and compare events to today’s world.

The Poe House is not wheelchair accessible. There is no charge to visit the museum and Arsenal Park. A donation of $2 per adult and $1 per child is suggested for a tour of the Poe House.

8. Get Some Fresh Air & Exercise

In search of physical activity? Here are some options to get you moving.

Cape Fear River Trail: This 10-foot-wide vehicle-free trail meanders along 5-miles of tranquil scenery through lush trees and plants teeming with wildlife. Walkers, joggers, and cyclists enjoy spectacular views of the Cape Fear River. The terrain is mixed but not particularly challenging for most. Wooden bridges, including one covered bridge, over 1,000 feet of boardwalk through wetlands, and other features make for a delightful outing for the whole family.

Arnette Park: Another scenic option for walkers and joggers, as well as for birdwatchers. This park also features areas overlooking the Cape Fear River. Share this peaceful space with squirrels, rabbits, foxes, and, if you’re lucky, whitetail deer.

Cape Fear Mountain Bike Trail: This trail currently extends for approximately 3-miles but has the potential for expansion to nearly 10-miles in the future., Meanwhile, if you want to expand your horizons to encompass longer, more challenging trails, be sure to visit the Nature Center and ask a park ranger about your options.

Because of Fayetteville’s proximity to Fort Bragg, the food scene is a foodie’s dream come true. If a cuisine exists, you’re likely to find it. Here is a small sampling of what awaits your palate in Fayetteville.

Fayetteville is a three-time recipient of the All-America City Award from the National Civic League. When you spend some time exploring what the city has to offer, you’ll understand why. Family-friendly, military-friendly, and just plain friendly, Fayetteville will stimulate your mind, nurture your body, and win your heart.