You are here: Home / The United States / New York / 10 Best Things to Do in Hammondsport, New York 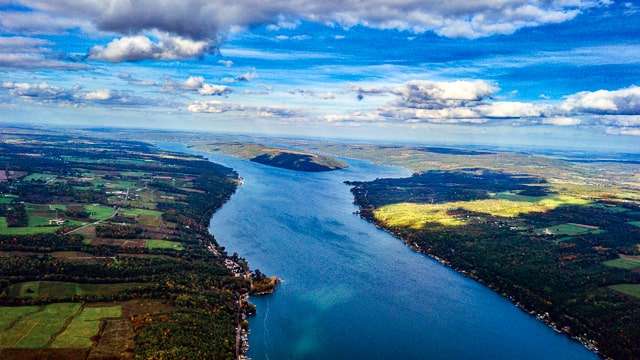 Hammondsport, New York, is located on Keuka Lake’s southern tip, the third-largest in the New York State’s Finger Lakes Region. The 11 lakes got their name due to their long skinny, finger-like appearance caused by receding glaciers over 10,000 years ago. The area offers stunning, natural scenery, pristine water, and steep hillsides that make a perfect micro-climate for growing wine grapes.

Hammondsport became known as Vine City because of the hamlet’s reputation for wine production. While wineries have been operating in Hammondsport since the end of the 19th century, it’s been a favorite recreation spot, especially on the water.

Boating, fishing, and swimming have made this an idyllic summer place for lakeside vacations. There are fantastic spots to hike or bike on scenic trails and enjoy the splendid natural surroundings off the water. Afterward, reward your efforts and taste the bounty from local farms in a glass or at a table, in a great restaurant. Hammondsport, New York, offers many opportunities to unwind. Here are ten of my favorite ways to enjoy this beautiful area.

Keuka Lake is the only Finger Lake shaped like a “Y.” Known as the “Crooked Lake,” because of its shape, Keuka Lake is about 20-miles long, almost 2-miles wide, and 183-feet deep at its deepest point. The nine-mile-long peninsula known as Bluff Point separates the lake’s east and west branches. The fishing is fantastic on Keuka, especially for trout (brown, lake, rainbow) and perch. Rent a boat from Keuka Watersports and fish. Not a fisherman? Rent a paddleboard, kayak, jet ski, or jump in; the water is fine.

The Wineries around Hammondsport are award-winning. The unique microclimate and soil (terroir) create the perfect growing environment for European vinifera varietals. The knowledge for growing these types of grapes was due to the experience and vision of one winemaker, Dr. Konstantin Frank. Dr. Frank knew he could grow vinifera varietals in a cold climate with the proper rootstock. His previous experience and education in Ukraine paved the way in the Finger Lakes. And for all the winemakers that came after him across the United States. Taste the wines of this visionary winemaker at Dr. Konstantin Frank named a top 100 Winery of 2019. Other excellent cellars include Weis for German-Style wines and Domaine LeSeurre Winery for dry wines with a French accent.

Wine steals a lot of the limelight in Hammondsport, but the beer in the area is legendary. Almost all the ingredients are grown locally from farmers in the area. The brewers are crafting some of the tastiest ales, lagers, and stouts out of their tasting rooms. The Brewery of Broken Dreams also creates an American Barley wine that they name Triskaidekaphobia. It is made on Friday the 13th using 13 ingredients and released the following Friday, the 13th, at 13 minutes past the 13th hour. Beer lovers know that it’s a particular release, and it has a cult-like following. Steuben Brewing’s lake view and expansive front lawn make it the perfect spot on a summer day. Combine that with a tasty IPA and a visiting food truck, and you have the makings of a terrific experience.

4. Learn About the Architect of American Aviation

Glenn H. Curtiss was a curious boy whose passion for speed and mechanics led him to create a better engine for his motorbike. He got noticed for his innovations and asked to build a unique engine for an airship. That was just the beginning. He innovated engines and later airplane designs that changed the aviation world we know today. In July of 1908, Curtiss flew the June Bug, a flying machine, over his hometown of Hammondsport. His leg of the journey won his team a Scientific American Trophy. Learn about this fascinating man at the Glenn H Curtiss Museum. You can view his early inventions, planes, and a collection of antique cars and memorabilia. Ask a docent to get a peek at the latest restoration project in the workshop directed by a volunteer team.

In the village of Hammondsport is a multi-dealer shop located in the historic Frey Opera House, circa 1901. This landmark building on Shethar Street is the home of the Opera House Antique Shop. The store offers furniture, primitives, nautical items, jewelry, and silver items, plus much, much more. When you enter, you could spend hours spying the incredible finds as you meander from room to room. And, if you didn’t find what you were looking for at the Opera House, another select store is Crooked Lake Antiques. They specialize in hard-to-find items and collectibles.

The Finger Lakes Boating Museum occupies three floors and several out-buildings of the historic Taylor Wine Company’s headquarters on the south end of Keuka Lake. The museum’s primary purpose is to educate and preserve the Finger Lakes Region’s boating heritage. And have a place to showcase the antique boats built by the hands of commercial boat builders throughout the region over the last century. The collection is vast, with over 200 boats built by over 40 craftsmen. You will be amazed as you view the priceless collection of vintage water-craft, including canoes, rowboats, inboards and outboards, hydroplanes, and wooden sailboats. A restoration workshop is also active and staffed by volunteers who dedicate their time, project by project. As you marvel at the collection, you will also get the chance to step into the time-capsule that is the Taylor Wine Company headquarters, a gorgeous building that is worth a separate tour.

Hammondsport is the birthplace of seaplane aviation. That is why Finger Lakes Seaplanes based their business at the Harbor Lights Marina on Keuka Lake. Pilot Andy Sable grew up in Hammondsport and became a pilot in the 1990s. The Harbor Lights Marina had been in his family for 40-years, so he knew he could combine flight with water. Along with his wife Tiffany, he and his partner decided to merge the marina with their dream of offering seaplane tours from home. In 2017 Finger Lakes Seaplanes was created. They provide scenic seaplane tours of the Finger Lakes Region. You can opt for a local 30-minute tour, a more extended 60-minute tour of Keuka, Seneca, Watkins Glen, or a 60-minute Keuka and Canandaigua tour. Then you get to land in Keuka Lake.

8. Dine in a Historic Inn

A convenient in-town spot just a few blocks from the lake, the Park Inn Restaurant has a cozy, casual feel with upscale cuisine. The building is also an Inn and one of the oldest in town. It dates to 1828 when a tailor occupied the space. The window seats along the front of the old shop make for romantic nooks, where you can sip a glass of wine and watch the people stroll by.

The wine list is diverse, and it received the 2020 Award of Excellence from Wine Spectator. Chef Dan Eaton prepares his dishes using the bountiful produce and products from local farms and purveyors in the region. A bonus, Inn-keeper Marie DeRosa’s warmth and hospitality make you feel like family.

The Finger Lakes Trail system is over 950-miles long. It runs from the Pennsylvania/New York border in Allegany State Park to the Long Path in the Catskill Forest Preserve, with several branch trails. The best way to find your best route is by looking on the Finger Lakes Trail website.

For a moderate hike near Hammondsport, I chose the Mitchellsville Gorge hike. In the summer or on a warm fall day, this is a cool walk in a forest with a babbling creek’s relaxing sounds. The trail is on private land for a part of the trek, so it is essential to be respectful. It’s not too steep but has an elevation rise of 500-feet and is suitable for a wide range of abilities. The gorge has seen some erosion, so use caution when close to the edges. It is 2.5-miles one way and suggested that you can turn around and head back for a total of a 5-mile hike. Park for free across the street from the trailhead at Urbana Town Hall on Pleasant Valley Road in Bath, New York.

When a day on the lake or a hike in the woods has you needing a cold, sweet treat, head over to the Crooked Lake Ice Cream Company. The famous shop is a two-minute walk up from the lake and a local favorite for the past thirty years. In 2018, the business gained new owners who modernized the décor and updated the menu, but still serve delicious ice cream any time of day. Whether it’s a cone or a milkshake, a stack of pancakes, or a burger for lunch, you will get a modern take on classic food in a family-friendly place.

The tiny village of Hammondsport has so much to do; it was named The Coolest Small Town in America by readers of Budget Travel Magazine. Year-round it has festivals, craft, and art shows, and live music events all around the lake. Hammondsport is only a four or five-hour drive from major cities like New York, Philadelphia, or Washington D.C. For those visitors further afield, Rochester, New York, is a major airport that is just an hour and thirty-minute drive from the hamlet.

It is a romantic getaway, a family-friendly vacation place, and an outdoor paradise. No wonder Country Living Magazine named it One of the best small Lake Towns in America.

Rovology’s Latest Best Things to Do