You are here: Home / The United States / Georgia / 10 Best Things to Do in Blairsville, Georgia

— BLAIRSVILLE, GEORGIA — Blairsville, in Union County, Georgia, is the center of the Northeast Georgia Mountains. Until recently, it was a rural town. Now visitors from all over have discovered the beauty of the Appalachian Mountains. Lately, it has become a tourist hub. Blairsville is less than a two-hour drive from Atlanta. There is no interstate through Blairsville, only mountain roads. Atlanta is the nearest airport. The charm and beauty make it worthwhile.

All of Union County is within the Chattahoochee National Forest. The Appalachian Trail passes nearby. It is a popular destination for hikers and campers. The mountains here were home to the Creek and Cherokee tribes before European settlers arrived. There are petroglyph sites within the forest made by earlier people. Still, because of vandalism, they are now closed to the public.

Fishing and hiking are big here. The people are friendly, and the traffic is light. You will find lots of old mountain music wherever you go in town. It’s a step back to a more peaceful time.

1. The Mountains are Calling

Brasstown Bald is the highest mountain in Georgia and Union County’s top scenic wonder. From the observation tower atop Brasstown Bald, you can view four states. The museum tells the story of Georgia’s mountains and the National Park Service, from the Cherokee myth about the Balds to an animated exhibit where Alan Woody, the first forest ranger, tells how he began restocking the area with deer.

Other exhibits show bears, foxes, and other wildlife that still roam the mountains. In addition, there is an antique steam locomotive and many other exhibits.

You can hike to the top when you reach the parking lot or pay $3 extra for a trolley to the top. The trolley is worth the extra money since it’s a steep climb.

2. Take it to Court Mountain Style

The Old Courthouse on the Square is a fixture in many small southern towns. Here in Blairsville, the old 1899 courthouse now serves as home to the Historical Society and museum about life in Union County. There is handmade farm equipment early settlers used. The county’s teachers and schools have an exhibit. Another exhibit honors those who served in the country’s wars.

3. Life in the Mountains

Mountain Life Museum is about a block off the Square and housed in the Grapelle Butt Mock House. The home is an annex of the historical society. The house, built around 1906, contains many objects that belong to the Butt family. The home offers a glimpse of how a middle-class family lived in Blairsville in the early 20th century.

Outside, the relocated 1861 Payne Cabin, a barn, corn-crib, and smithy; practically an entire early settlers’ village is built around the cabin. The county hosts a Mountain Heritage Festival there each September.

Byron Herbert Reece Farm and Heritage Center opened in 2012. It celebrates the life of Union County’s most famous poet. Reece wrote four books of poetry, two novels, was nominated for a Pulitzer Prize, won two Guggenheim awards, and was writer-in-residence at the University of California at Los Angeles, Emory University in Atlanta, and Young Harris College in neighboring Towns County. While he was teaching there in 1958, Reece took his own life. He was dying from tuberculosis, which had killed both his parents. The Reach of Song, a play about his life, is the State Historical Drama.

His farm home portrays early 20th-century farm life in the North Georgia Mountains. It was not an easy life. Like most of the inhabitants of Union County, Reece depended on farming as his primary source of revenue. As a result, much of his poetry deals with planting and growing crops and the seasons.

Start your tour in the visitor’s center, the home Reece helped build for his parents. Inside, you’ll see many objects from his home and a picture of Reece and his parents in front of the fireplace.

Outside, the small red-frame building, Mulberry Hall, is the writing studio he built with his own hands. There are even farm animals that would have been present on the Reese farm. In the restored barn, there is a video about Reece’s life. The Reese Farm hosts concerts on the grounds on many weekends.

Just about a mile south of the Reese Farm, Vogel State Park is Georgia’s second oldest state park. The Civilian Conservation Corps (CCC) built the park in 1931. The park has sites for campers ranging from tents to large RVs. Vogel has cabins, some of which were the original ones built by the CCC. There is a small CCC museum in the park.

What is now Lake Trahlyta in Vogel was the site of Reese’s birthplace. They built a dam on Wolf Creek to creating the 22-acre lake. It’s a popular place for swimming, fishing, canoeing, and kayaking. The park has a small amphitheater by the lake for concerts. If you notice that music is pervasive in Blairsville, you are right.

Moonshine and music go together, but whiskey was one thing you couldn’t find, at least legally, in Blairsville just a few years ago. Granddaddy Mimm’s Distilling Company has changed that. Back in the mid-1900s, Jack “Mimm” McClure made illegal moonshine and was a power in Union and neighboring towns. Today, his grandson, Tommy Townsend, is making his grandfather’s product legally.

Granddaddy Mimm’s distillery is located a block off the square. You can have a delightful cocktail and tour the distillery with its copper stills, much like Jack McClure used.

In addition, Tommy has a section with artifacts like a moonshine jug and a one-armed-bandit (slot machine) his granddaddy had in his bar near the Georgia South Carolina border back in the day.

Tommy is a celebrated musician as well as a moonshiner. He played with Waylon Jennings. Today, he is the lead singer for Waymore’s Outlaws, a band composed of Waylon’s original band members. Tommy has concerts at the distillery; even if you don’t drink, you will want to attend.

Just about six miles south of Vogel Park, Paradise Winery grew from cabin rentals when Bob and Ike Lander bought the cabins in the early 2000s. Today, they have created a spa and winery perched on the side of a mountain along with the cabins. They grow grapes locally, and the spa offers luxury services. In addition, they offer live music every Friday and Saturday in their tasting room.

Mountain Crossings at Neel Gap is on the side of Georgia’s second-highest peak, Blood Mountain. Both the mountain and the hostel/outfitter/gift shop have a story. Legend says Blood Mountain got its name from a famous battle. When the Cherokee came to the area, the Creeks were entrenched here. The two tribes fought a ferocious battle at Slaughter Gap on Blood Mountains. Stories said the creek ran red with blood, thus the name.

Mountain Crossing began in the 1930s to serve as a dining hall and inn for the CCC workers. In the early 1980s, the building was in poor shape was almost torn down. Instead, it experienced a rebirth as Mountain Crossings, which originally functioned as an outfitter.

It’s the first major stop on the Appalachian Trail, 30-miles away at Springer Mountain. The trail goes through the building, and thousands of hikers pass through on their way to the end of the trail in Maine. It’s become a gathering place for hikers and visitors.

Mountain Crossings has a hostel and showers for the hikers and plenty of gear to replenish or change needed gear. A gift shop offers items to please the non-hiker visitor. A unique tradition is for hikers who have completed the entire trail to return and toss their hiking boots over a tree outside. Look for the tree directly in front of the building near the steps.

Pappy’s at Owltown Market has over 25 flavors of fudge plus lots of mountain-style gifts. The market is a cross between a flea market and a mall where you find things like the Amish furniture and all kinds of jams and jellies.

A little closer to town, you’ll see Picker’s Barn and Storage. You will find the weirdest things you can imagine here. There was a wood cutout of Big Foot and a 25-pound bomb in the middle of one booth with a sign that said, “Perfect for a man cave! $250.” I assume the bomb is not live. There are some nice stained-glass décor and several antique wood stoves. On weekends, there is a flea market outback.

For more conventional shopping, there is an assortment of stores around the square called Village Square Mall. There are boutiques, crafts, tee-shirt shops, food items, and other individually owned stores.

When you visit, a dining-must is Hole in the Wall Restaurant on the square. It serves breakfast all day and has been in business since 1931, making it Blairsville’s oldest restaurant.

Downtown Pizza, just off the Square, has a large variety of pizzas, including dessert pizza. They will even make a special one if you request it. The service is buffet-style. If you are trying to be healthy, there is a great salad bar as well.

Blairsville is a unique place to visit. There are no chain hotels and few motels but lots of camping and cabins. The biggest draw is the natural beauty of the Blue Ridge Mountains. You can drive down an unpaved mountain road and discover a bubbling creek and unbelievable scenery at its end.

Fishing and hiking are big here. The people are friendly, and the traffic is light. You will find lots of old mountain music wherever you go in town. It’s a step back to a more peaceful time. 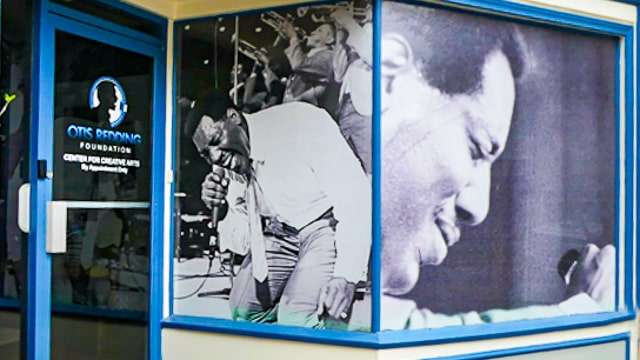