You are here: Home / Sri Lanka / 11 Best Things to Do in Colombo, Sri Lanka 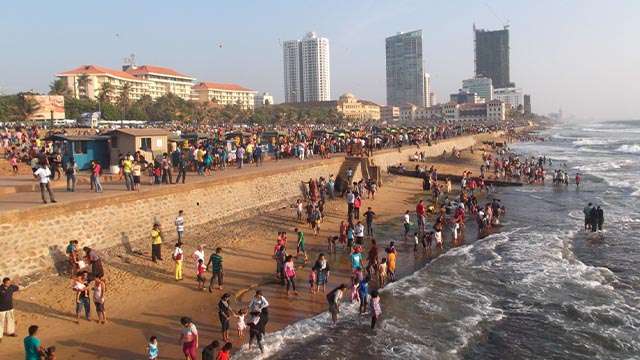 Noisy traffic, lively street markets, upscale nightlife, and a thriving food scene makes Colombo a buzzing hub of energy. The capital and largest city in Sri Lanka may not have an exotic postcard look, but Colombo is more than a stopover.

Recent years have seen an increase in travelers visiting the island nation. New developments have shot up in the capital as a result. There are new wellness boutiques, revamped heritage hotels, and modern Sri Lankan restaurants as well as stunning cultural attractions.

Whether you are a nature lover, foodie, history buff, or luxury traveler, Colombo has it all. Here’s my pick of 11 best things to do in Colombo:

Start your day at Galle Face Green, the city’s main promenade,where locals come to unwind. Galle Face Green is a beautiful strip covered in greenery; it is bounded by skyscrapers and hotels on one side and a beach on the other.

On a hot summer day, there is nothing like cooling off at the beach. Galle Face Green is the perfect place for family and friends, young and old, to relax by the water. Best of all, the food stalls scattered around the corner will introduce you to the spice of the local fare.

Pettah is a warren of streets filled with locals, tourists, and tuk-tuks. In the heart of the district, Hindu temples, a church, and the famous red mosque Jami Ul-Alfar remind of the city’s religious diversity. Stroll through Pettah to open markets that sell everything from fresh produce to precious gems.

Around every corner you will find food stalls, where grinning vendors offer the tastiest street food. If the heat gets to you, follow the locals and sip sweet coconut water from the king coconut, a variety native to the island.

Carry on to Pettah’s floating market. In the colonial era it was a shoddy canal way connecting with the industrial area; today a revamped concrete walkway leads along the water to a series of floating stalls that sell everything from Sri Lankan handicrafts to fresh fruits and vegetables. Whether you prefer to shop, eat, or both in Pettah, it is the ideal place to watch the street life of the bustling city and catch the vibrant energy crossing through.

Picture a collection of colonnaded pavilions with striking copper roofs floating on a man-made lake. If you’re thinking this sounds like a holiday resort or a sanctuary, then think again. This is the new Parliament Complex in Colombo.

The complex was designed by Geoffrey Bawa, the world-famous architect behind tropical modernism, a design movement that mixes colonial and indigenous design styles to create an open aesthetic. The Guardian called his work “a new, vital—and yet essentially Sri Lankan—architecture”.

A visit to the grand parliament will evoke wonder in both architecture and nature lovers. Remember to fill in the visitor inquiry form with your details before visiting.

In the urban sprawl of modern Colombo, spending an afternoon searching for historic colonial gems is very rewarding. The Dutch Hospital stands out for its colonial-era architecture with its boxy pillars, terracotta roof tiles, and large central courtyards built in the late-17th century by the Dutch.

Today it houses the city’s most famous restaurants and boutiques. Don’t forget to visit Odel for clothes or BareFoot to buy handloom collections. In one of the courtyard’s open-air cafes, enjoy a delicious cocktail and soak up the relaxed vibe of the place.

The Portuguese came, conquered, and built a fortress in Colombo to combat foreign attacks. It was taken over by the Dutch and later revamped by the British. Today’s Fort area is at the heart of the city and dotted with 17th-century colonial facades and 21st-century glass towers.

Sign up for the Colombo City Walk to take in the history of the iconic landmarks like the beautiful Galle Buck Lighthouse, Fort Clock Tower, Lloyd´s Building, Central Point Building, St. Peter’s Church (the oldest church in Colombo), and the Victorian-style Cargills.

The Grand Oriental Hotel is ideal for a tea break and a history lesson. They say in its heydays the hotel would rival the Ritz. The Fort area is also not far from the President’s House and various government buildings.

Centuries of Malaysian, Portuguese, Dutch, English, and Arabic influences have shaped Sri Lankan cuisine. By the time you leave the capital, you’re bound to have a taste for the country’s traditional delicacies.

Don’t leave without trying an egg hopper, a bowl-shaped pancake with an egg cracked in the batter and served with tangy sambols (coconut relish) for breakfast. Pittu, a steamed round serving of ground rice and/or coconut, is another delight that is hard to resist. The Dutch-inspired lampraise is a popular street food to try. The dish is an assortment of rice, lamb curry, fish cutlets, eggplant curry, seeni sambol (onion curry), and prawn blachan (dried shrimp paste) wrapped in banana leaf and then steamed.

If you get tired of Sri Lankan curries and sambols, it’s time to hit one of the capital’s trendy restaurants. The celebrated chefs are constantly innovating with Sri Lankan flavors. While a visit to Colombo is incomplete without a seafood overdose in the famous Ministry of Crab, foodies should also not miss the continental fare at the Gallery Café.

Thousands of tourists come to this teardrop isle to experience the serene pleasures of spas and Ayurvedic treatments. After a long day out in Colombo, head to White by Spa Ceylon, a spa that is inspired by Sri Lanka’s rich Ayurvedic heritage and the wellbeing rituals practiced in the grand palaces of ancient Ceylon.

Once inside guests can enjoy the comfort of the luxurious over-sized spa beds and recliners. The spa offers body scrubs, wraps, facials, head rituals, massages, and oil treatments under the hands of skilled therapists. After each session, refreshing organic herbal teas will soothe your body, mind, and soul like nothing before.

You can also shop for Spa Ceylon, Sri Lanka’s leading skincare brand, and take back a home spa kit to pamper yourself with later.

Vacations in Sri Lanka once meant relaxation and rejuvenation amid nature, but times are changing in the capital city. Colombo is up-and-coming with edgy pubs, casinos, and nightclubs. If you want to dance all night under multi-colored laser lights, head to the dance floor at Kama. Just next door is Club Mojo at Taj Samudra where the well-heeled throng each night.

For more laidback parties head to King of Mambo at the ocean-front Galle Face Hotel. Here Cuban beats fill the air and waiters in colorful shirts and hats serve up classic Cuban-flavored cocktails and a delicious mix of Cuban-Mediterranean fare.

Picture a herd of elephants roaming free and bathing in glimmering wetland waters. If this paints a beautiful picture, you’ll be even more amazed when you visit the scene in person at the Minneriya National Park, less than an hours’ drive from Colombo.

The park is also home to toque macaques, sambar deer, buffalo, crocodiles, leopards, and many birds. Game drives in the early morning are best for bird watching while late afternoons are ideal for elephant sightings. You never know what lies ahead in the wilderness.

In the hill country of Nuwara Eliya, tea cultivation remains the predominant commercial activity and a draw for tourists to the local hotels and plantations. Down in Colombo, high tea customs linger and are a favorite with both locals and travelers.

You can schedule a tea tasting session with experts and learn about the customs and history of tea in Sri Lanka.

The English Cake Company is a wonderful stop for a snack of scones, mini grilled sandwiches, and a pot of earl grey. I would advise booking your table a day early as there is a high demand for reservations.

Those who want to experiment with new flavors can opt for the cinnamon and vanilla special tea at Rare in Uga Residences.

t-Lounge by Dilmah is an upscale tea bar. Tea connoisseurs often go for the mild flavors of Nuwara Eliya Pekoe or the robust Supreme Ceylon Single Origin. You can also try the t-shakes, sparkling teas, and tea-infused ice creams.

Buddhism came to Sri Lanka in 236 B.C.E. and has since become the national religion of the native Sinhalese people. Gangaramaya is an iconic Buddhist place of worship in Colombo housing an extensive collection of artifacts and artwork. It also has a library, a museum, and a learning center. The architectural style is an amalgam of Sri Lankan, Burmese, Chinese, and Thai influences.

Located near picturesque Beira Lake, the temple is a must-visit for those interested in the Buddhist faith and meditation. Today swarms of tourists make a beeline to see the colossal statue of Buddha inside the sanctuary. Outside, it is hard to lose sight of the steps lined with statues of Buddha and stone stupas (dome-shaped structures).

While Sri Lanka has historically been a destination for relaxing and unwinding, nowadays tourists can also find a hopping nightlife scene in the capital. There truly is something for everyone on this verdant island.