You are here: Home / Spain / 9 Best Things to Do in Gran Canaria, Spain

Just a three-hour flight away from mainland Spain there is an island called Gran Canaria, a lost piece of the Caribbean where Spanish cuisine and colonial history meet Latin America’s melodious accent and warm hospitality.

Located in the Canary Islands, Gran Canaria was once a mandatory stop for boats sailing to and from America. The constant cultural exchange between continents left its mark in Canarian culture and architecture. History enthusiasts will find museums that focus on the conquest of America and perfectly preserved Spanish colonial towns.

Foodies have a lot to discover as well, Gran Canaria offers visitors the best Spanish tapas experience enhanced with a fun Canarian touch. Local dishes are worth tasting too, especially the papas con mojo (potatoes with Canarian spicy tomato sauce) and dishes made with gofio, a delicious type of corn flour.

There are also plenty of things to do outside of museums and restaurants. Gran Canaria has a year-round temperature range of 68 to 82 degrees Fahrenheit, and it seldom rains. The warm climate setting is perfect for enjoying snorkeling in its pristine waters, hiking its many mountains and volcanoes, and resting in the islands black sand beaches while watching a slow and magnificent sunset over the Atlantic Ocean.

Either take a ferry from mainland Spain or fly to Gran Canaria and follow this guide to get the best Canary experience.

1. Visit the Old Town of Vegueta in Las Palmas

First on the list is a trip to Las Palmas, the biggest city on the island. Hop on a guagua (the local name for public buses) or rent a car at the airport and drive the half an hour trip to the capital city. Once there, head straight to the old town of Vegueta, a colonial neighborhood of hand-carved wooden doorways and stone-paved roads.

Take your time walking along the colorful facades and lift your eyes to meet the typical Canarian balconies and 500-year-old Gothic and Neoclassical architecture.

If you get tired of walking up and down Vegueta’s streets, stop to get a drink and a bite to eat in one of the many homely tascas (small bars that also serve food) around.

While walking around the old town you will surely stumble upon a yellow colonial-style mansion with an enormous stone carved doorway: it is Casa de Colón, a museum where you can learn all there is to know about the Canary Islands and its relation to the conquest of the Americas.

You can learn, with its several permanent exhibits, about the relationship between the Canary Islands and the New World, what pre-Hispanic America was like, and how Columbus and other explorers ventured the seas.

Once the house of the governor of Las Palmas, Casa de Colón was built in the spot where the city was founded, a few blocks away from the old city market.

On Thursdays, stay in Vegueta until 8 p.m. to meet with locals and tourists alike at the old market, and flood the surrounding Pelota and Mendizabal Streets to enjoy a classic tapas experience with a fun Canarian twist.

The premise is simple, the night starts when the pinchos, small appetizers on a stick,are out on every tascas. It follows with you hopping from one restaurant to the next, eating and drinking until they run out. Mild Canarian beer and red wine are always served with this special tapas. And that’s it!

In Vegueta, you will find everything on a stick, from Iberian pork jam to Saharan octopus and even vegetarian options like egg and potato omelet sandwich.

On the other side of the city of Las Palmas, right in the middle of its busiest area, there is a 1.8-mile golden sand beach called Las Canteras and a marine reserve that thrives with underwater life. The crystal-clear waters and golden sand of this Gran Canarian bay are protected by La Barra, a volcanic rock formation that works as a wave breaker.

During the day, when the tide is low, Las Canteras Beach becomes the perfect spot for swimming, paddling, snorkeling. At night, diving and snorkeling tours can be booked to watch angel sharks and Saharan octopus among other species.

Around the La Barra area, water activities are recommended with care when the tide is high. Currents can be very strong and rocks hiding under the water could become a hazard.

But even at high tides, the beach can still be enjoyed. With waves up to 16 feet, the southernmost tip of Las Canteras is perfect for surfing.

Also, all along the coastline, there is a promenade where you can sit and watch endless views of the ocean while enjoying a refreshing tinto de verano (wine with lemon soda) from one of the several bars and restaurant terraces.

5. The Virgin Sands of Güigüi Beach

A few hours away from Las Palmas, in the western part of Gran Canaria, there is a secluded, unspoiled, black sand beach called Güigüi that is a must-visit spot on the island. But getting there is not easy.

Güigüi Beach can be reached by water taxi from the beautiful harbor of Mogan or, for more adventurous travelers, by driving up to the Güigüi track and hiking a 2.5-hour path through the Canarian mountains.

If you are up for some adventure, follow the main road to Tasartico village from Las Palmas and from there the signs will lead you to a dirt road. Continue until you reach the Güigüi track signpost and park there.

The hike starts with a challenging half-mile climb that takes you from 160 to 2000 feet above sea level and then downhill a 2.5-mile mountain track with jaw-dropping views of the sea, Tenerife Island, and the Teide Volcano. It finishes right on the dark sands of Güigüi beach.

Bear in mind that the trip back to your car is going to be a steep 2.5-mile uphill climb and that along the track there is no shelter from the sun and almost no wind. The hike should not be attempted without enough water or during the hottest part of the day.

6. Swim in a Natural Ocean-Water Pool

If you don’t like the idea of a secluded beach but still want to escape the buzz and fuzz of the city, head out to one of northern Gran Canaria’s small towns by the sea and plunge into its many natural pools.

These enclosed spaces of volcanic rock, into which seawater seeps without human intervention, can be found all around the island and are usually surrounded by Martian-like volcanic landscapes carved by the water through millennia.

In these pools you can swim without having to worry about currents or waves and plunge into the transparent waters of the Atlantic Ocean while colorful fishes and crabs watch you with curiosity.

On the southernmost tip of the island, you can find Maspalomas Dunes, one of Gran Canaria’s natural wonders. You’ll find a dynamic sand dune system, palm groves, a saltwater lagoon, and a golden beach stretching as far as the eye can see.

This 1000-acre patch of protected Nature Reserve is in constant change as the sand shifts with the wind and the tides form a different landscape each day.

Be sure to take your camera, the photo possibilities are endless.

8. Visit the Archeological Site of Risco Caído at Artenara

It is not just the coastline that is worth visiting in Gran Canaria. Right in the center of the island, the archaeological site of Risco Caído holds the remains of the troglodyte settlements in which the pre-Hispanic owners of the land used to live.

In this UNESCO World Heritage Site, you can see how the original settlers thrived in complete isolation; some caves worked as habitats, granaries, and cisterns, as well as two sacred temples where seasonal ceremonies were held.

In one of the caves, the only one in the Canary archipelago that has a stone-carved dome ceiling, there is an opening that lets in the sunlight which shines over a series of drawings and stone shelves that mark the time and harvest seasons of the year.

Risco Caído is an impressive site to immerse yourself in a culture so old and different that it transports you to ancient times.

9. Climb up to Roque Nublo

Roque Nublo is the perfect evening spot for nature lovers. At more than 5700 feet above sea level and right in the middle of the island, this 260-foot tall rock monolith guarantees a perfect view of the sunset over a sea of clouds, with the island of Tenerife and the Teide Volcano on the horizon.

The pre-Hispanic settlers considered Roque Nublo a sacred place, and its meaning has transcended culture to become one of the most loved icons of the island for Canarians.

Almost every road coming from the north or the west of the island takes you to a parking lot at the base of Roque Nublo. Once there you will have to walk a quick but steep one-mile path to get to the best sunset-watching spot on the island.

When traveling from Gran Canaria’s airport to the city of Las Palmas, the island might strike you as a very humble and dry land. But if you take the time to visit its most iconic places and wander around its many unspoiled landscapes, you will find that it astonishes you for sure.

From perfectly preserved Spanish colonial towns to troglodyte caves, delicious Canarian food, and some of the best beaches in Spain, Gran Canaria has a lot to offer wanderlust visitors. 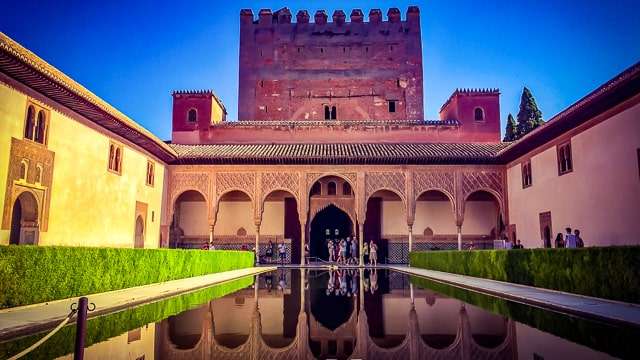