You are here: Home / Montenegro / 12 Best Things to Do in Montenegro 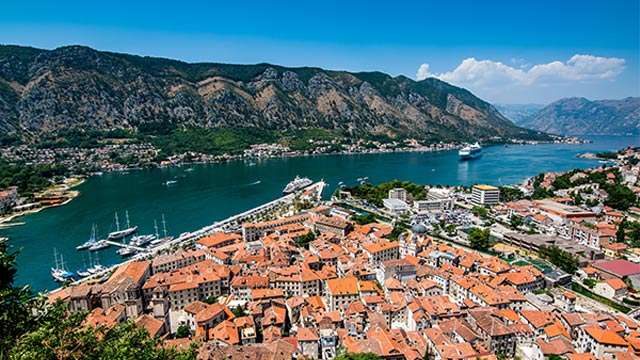 The word ‘Montenegro’ means ‘black mountain’, but this country is dark in name only. Montenegro’s charm is found in its rugged mountains and sweeping beaches along the Adriatic sea. You’ll find medieval castles and villages dotted throughout the towns, adding to the ancient atmosphere of the place.

Montenegro hasn’t always been a leading player when it comes to attracting tourists–in the past people could barely find it on a map. Today, however, the country is visited by thousands of tourists annually, owing its fame to its ideal location on the azure Adriatic.

Podgorica is the official capital of Montenegro, and Cetinje is classified as the Old Royal Capital.

If you’re looking for somewhere that will satisfy the adventurer, history lover or beach-goer, Montenegro is the right place for you.

The trip begins from the Old Town of Kotor. Be warned, a little bit of stretching before climbing 1,400 stairs may be required, but the reward at the top will be worth it. This impressive fortress dates back somewhere between the 9th and 19th centuries and has been under French, Russian and Venetian rule.

The walls of the Castle of San Giovanni are almost 4.5 kilometers long, and were built by the Roman Emperor Justinian the Great. The castle, along with Kotor Bay, are now UNESCO World Heritage sites. If you can, try plan your trip early in the morning or before sunrise, the views of the surrounding Old Town and clear blue fjord are breathtaking.

Lake Skadar is a serenely magical place, with two thirds of its body in Montenegro and the remainder in Albania. This lake takes its name from an Albanian city, and functions as a nature reserve for Albanians. For Montenegrins, Lake Skadar has a different meaning.

It’s a wonderland of mountains, island monasteries, and floating meadows of water lilies. It’s a national park built on the largest lake in Southern Europe. If you want to visit it, we highly recommend taking the boat tour so you can discover every nook and cranny.

Legend has it that the lake was made from pixie tears, although you’re sure to hear variations on this tale from the locals.

If you’re in search of adventure, Nevidio Canyon is an absolute must. This unique canyon boasts cascading waterfalls, gorges and crystal clear lakes throughout its 1,700m expanse.

The canyon remained relatively unexplored until the late 1960s, but is now open for tourists to take part in the guided exploration. Every participant is kitted out with the required safety gear – wet suit, helmet and waterproof shoes – as well as being led by qualified, experienced guides who know the terrain inside out. It truly is an unforgettable experience.

Queen’s Beach is located near the Milocer hotel, and is just 120 meters long. The beach is named so for a reason – the luxury hotel was a former summer residence of the Yugoslavian Karadjordjevic dynasty.

The beach is shrouded by cypress and olive trees, so there is always somewhere to find shade in the hot summer months. Two white rock formations circle the area,giving the beach a totally peaceful and secluded atmosphere.

The restaurant is located in the Old Town, in a quiet courtyard surrounded by buildings of Ottoman and Venetian design, so you can sit outside and enjoy the historic setting while you sip your coffee. The interior of Bocalibre is just as charming, with exposed wooden beams and red brick walls.

The menu has mostly Italian dishes, stone-oven baked pizza or pasta for the main, followed by traditional, (and apparently the best in town), Tiramisu for dessert. Prices are affordable too; this isn’t the typical tourist trap you’ll find in any historical center.

Rakia is the national drink of the Balkans, like Vodka to Russians, except this is drink stronger and (arguably) tastier. Rakia has a fruity base, made from grapes, peaches, apples or even figs and nuts. This drink has even stretched as far as Romania, where they make their own version called Rachiu.

Be warned, Rakia is a strong drink, and can hit you in a matter of seconds if you don’t pace yourself.

Built into a sheer cliff face, Ostrog Monastery seems to defy the laws of gravity. Thanks to its distinct white facade, the structure can be seen from miles away.

The Monastery is divided into two sections: The Lower Monastery and the Upper Monastery, the latter of which gives the appearance of almost melting into the rock on which it was built.

Lipa Cave is a karst cave situated in the Montenegrin mountains. There are two ways to explore this underground realm. The first option is the easier of the two; the humble Cave Tour. You will be guided along the elevated corridor through winding passageways and amazing rock formations.

This is a walking tour, and lasts approximately 1 hour. Be sure to wrap up, as the cave retains its low temperatures all year round.

The second option is for the more adventurous souls; the Extreme Cave Tour. You begin the tour by descending into the cave from a rope attached to the ceiling, then proceed to explore every nook and cranny, hidden lake and rock formations that the guide takes you to.

It requires some level of physical strength and stamina, but it’s a much more interactive tour.

Ulcinj is one of the oldest settlements on the Adriatic Sea, more than 2,000 years old. While it’s still a Montenegrin town, the population is primarily Albanian, the reason being that the beaches in Albania aren’t quite up to scratch with those of its neighbor.

Ulcinj boasts the longest beach on the Adriatic sea, spanning more than 10 km. This provides visitors with plenty of room to spread out, relax and enjoy the deep blue waters.

There are lots of restaurants, cafes and shops along the promenade, so you needn’t worry about bringing food and drinks with you.

Lovcen is a mountain located in the southwestern part of Montenegro. It is popular among tourists and locals, as it’s the final resting place of Petar II Petrovic Njegos, a political and cultural leader beloved by the people of Montenegro.

The area also functions as a national park, and visitors can even bring tents and camp overnight.

Aside from the mausoleum of Petar II Petrovic Njegos, families or groups of friends can enjoy the adventure park, with well-signed trails ideal for hiking or mountain biking, or the large, open fields, perfect for fun activities and picnics.

This Catholic Church, called Our Lady of the Rocks, is one of the most memorable things to see in Kotor. It is a man made island, built over 500 years ago by two Croatian fishermen.

The story goes that the two men saw an apparition of the Virgin Mary there, and so they believed it was their mission to build a chapel on the island, commemorating the spot. Today, it houses a venerable icon of the Virgin Mary, an altar made of Carrara marble, and a history museum documenting the Perast Culture.

You can only reach this floating church by boat, but ferry connections to the island are available from almost every port in Boka Kotorska.

If you have limited time in Montenegro, or don’t know where to begin planning your trip, taking the 360-tour is an ideal option. There are countless tours available, from cruises and seaside tours to rafting and paragliding tours.

Having an experienced guide is always as advantage too. After all, what better way to hear about the history and culture of a place than from a local? The tours depart early in the morning, so you’ll have plenty of time to discover all of what’s in store.

You can check out the tours on their website: https://360monte.me/.

How to get to Montenegro?

Although Montenegro looks like a small country, there are 2 international airports: one in Podgorica, and one on the coast in Tivat.

The country is also easily accessible from Croatia. You can get a cheap flight to Dubrovnik, and take the bus along the coast to Montenegro.

There are several daily buses and trains from Serbia too. The quickest and most comfortable way to travel to Montenegro is by ferry from Italy, but it will cost you more.

Accommodation in Montenegro, especially hotels, can work out as rather expensive. That’s why many travelers end up staying in private rooms, or private apartments found on Airbnb.

During warmer months, hotel and BnB owners will sometimes wait for tourists outside the bus stations. In this way, tourists can negotiate room prices with the proprietors.