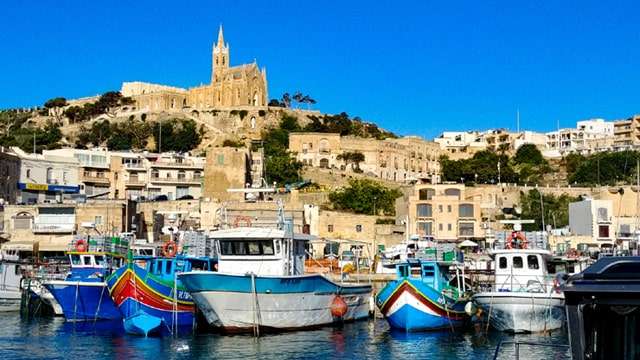 Gozo is a small island in the Mediterranean archipelago of Malta. There are 37,000 residents on 26-square miles. The 9 by 4.5-mile island takes you back in time a couple of decades. It’s a quiet place where agriculture and fishing have been the way of life for centuries.

Gozo, Malta is slow-paced; fewer tourists make it to Malta’s ‘Little Sister’. Away from the ferry terminal, traffic is light. Day-to-day life is regulated by the sea, seasons, and crops. A church bell and rooster announce the day’s beginning. Shops close for a mid-day break. At the end of the day, folks gather at sidewalk cafes, eating, drinking, laughing, and conversing in English, Maltese, Italian, and bits of Arabic.

Said to have been the home of the mythological Calypso, the nymph from Homer’s Odyssey, Gozo’s shoreline has sandstone cliffs with secret beaches and hidden caves. In places, the wind and waves have sculpted cliffs wearing away the base, creating an arching wave of honey-colored sandstone.

The best way to get to Gozo is by ferry. The short crossing from the Port of Cirkewwa on Malta to Mgarr Harbor on Gozo is easy and inexpensive. The Gozo Channel Line makes the 25-minute trip frequently. There are crossings 24-hours a day. Round-trip tickets are $6. You don’t need a ticket when boarding in Cirkewwa; you pay the fare on the return from Gozo. The ferry carries cars, trucks, cycles, and foot passengers.

Seating is available in several inside lounge areas. You have a choice of tables, booths, and rows of seats. On deck, there are seating and standing spaces with marvelous views as you approach Gozo.

Onboard there is a canteen where snacks, sandwiches, beer, and wine are sold at very reasonable prices. My favorite is a Cisk beer (pronounced ch-isk). It has been Malta’s favorite since 1929. Available in six styles, the easy-going pilsner pairs well with most foods or as an afternoon cooler.

While the trip is short, it’s the ideal way to fine-tune a laidback Gozitan frame of mind.

Ggantija is a megalithic temple compound. It is over 5500 years old; some say closer to 8000. The “Giantess” is the oldest standing building on earth and is thousands of years older than the Pyramids in Egypt. This UNESCO site has fascinating ruins built in a time when the inhabitants had no recorded history.

Separate parts of the compound are connected by all-access walkways. The site has been used by man as a revered place of worship and burial. Evidence of houses, farms, and even trash dumps have been discovered.

A trip through the museum is essential before exploring the ruins. Centuries of the site’s history are illuminated with artifacts, illustrations, and video. The museum encounter will help you imagine the people and life that has been here for centuries. Docent-led tours are available. Check out the gift shop for a book or postcard to mail to yourself. Admission ranges from $0 to $10.50 depending on age group and concessions.

Located in Xagħra, take a 10-minute direct bus from the Victoria Bus Terminal to get there.

Widely traded and used to preserve food, sea salt has been harvested on Gozo for centuries. Salt farms are dotted around Gozo, looking a bit like modern art sculptures on the ground.

Salt farms are made by carving shallow pans from sandstone flats along the shore. Many of the salt pans you see in use today were cut hundreds of years ago. The pans are filled with seawater. As the water evaporates, the salt is harvested, dried, packaged, and sold. You can buy Maltese sea salt in any food or souvenir shop.

There’s a Salt Pan Walk that takes you along the coast and through villages. If you go early in the morning, you might see a salt harvest underway. Take the Salt Pan Walk to see all of Gozo’s salt pans with this guide.

The best way to see Gozo is on foot, so don’t forget a pair of sturdy shoes. There are fascinating sites and experiences all over the island that are only accessible by footpath. Walks take you through villages, farmland, vineyards, olive groves, and windswept clifftops overlooking the impossibly blue Mediterranean.

The little island is crisscrossed by footpaths that have been used for thousands of years. Some by man, others by goats. On one of my walks, I followed a narrow rut, placing one foot in front of the other, thinking that Maltese folks must have tiny feet. Then I realized Goat Trail on my GPS was not the trail’s name. It was an actual path used by goats.

Seven walks for humans, plus a coastal hike, are mapped and described here.

The Maltese love a good party. It seems there is a celebration or festival almost every week of the year. Best of all, these folks love fireworks. Most festivities include pyrotechnics.

Celebrations, or festas, as they are traditionally called, are held when harvesting fish, shellfish, wine grapes, olives, honey, fruit, and grain. Some celebrate village saints or religious holidays. Many festas are for the pleasure of music and dance. Festivalgoers can take in local artist’s exhibitions, music concerts, historical buildings, and museums. You’ll find Maltese food tasting, plus plenty of Maltese wine and beer. Many festas include traditional costumes, music, and dancing. Find a festa to attend here.

Gozo’s first parish, Rotunda of Xewkija, is also known as Rotunda of St John the Baptist but is locally called the Rotunda.

The magnificent building towers over the town of Xewkija, one of Gozo’s oldest villages. The opulent interior displays breathtaking frescos, sculptures, and stained glass. This massive church has the third-largest unsupported dome in the world. The first church on this site was built here in 1678. Over the ages, it was rebuilt several times and eventually dedicated to St John the Baptist.

The present-day building’s first stone was laid in 1951. It took parishioners 20 years to build the massive church. Most of the labor was donated.

Remnants and sculptures from the older, now dismantled church are displayed in the Sculpture Museum. You can take a lift to the dome for the most spectacular vista over Gozo. You can even see Malta.

The Citadel—also known as the Castello and Cittadella, is an imposing sandstone fortress in the heart of Victoria (also called Rabat), Gozo’s capital city. The site has been inhabited since the Bronze Age. Inside the sandstone walls are churches, museums, runes of dwellings, and small gardens. There are several eateries and plenty of shopping.

Plan to spend an entire day here. There is so much to see and do. A 16th-century prison shows that graffiti is nothing new. The Gozo Museum of Archaeology covers prehistory to modern-day events, and there are six other museums dedicated to Gozo’s history and culture. This remarkable place will be of particular interest to those drawn to fortifications and military history.

There is no entry fee for the Citadel, but some attractions, museums, and churches ask for a few euros. Located a 10-minute walk from the Victoria Bus Terminal, you’ll pass by the town square and a lively street market on your way.

What is the best place to snorkel and dive on Gozo? Everywhere. Gozo and Malta have some of the highest-rated dive sites in the world. Whether you descend from the beach or a boat, it will be an extraordinary experience. Coral reefs, caves, and wrecks are popular diving excursions, but snorkeling off the beach can be rewarding, especially for children and new divers. Dive centers are plentiful. You can rent equipment, get training, advice, or join a dive tour. Find some of the best dive centers here.

Kayak to Comino, a small island between Gozo and Malta, or anywhere around the island. From beginners to experts, Gozo has a kayaking adventure for everyone. The Mediterranean’s warm waters are perfect for a day paddling.

A secluded lido below a sandstone terrace and white-umbrellaed café is my idea of heaven. Sheltered coves opening into the Mediterranean are an iconic setting for a long, lazy lunch you’ll never forget. If you only have time for one relaxed lunch, go to Kantra Beach Club.

As you are seated, a waiter brings a tray of seafood on ice, caught in the cove below that morning. You choose from small fish like pagella (red snapper) or grilled king prawns. While listening to your fish sizzle, sip a glass of Maltese bubbly and nosh on small plates of olives, bread, cheese, sausage, and beans.

Your succulent fish will be served with a vegetable medley. Coffee and dessert are a must but take your time; no one is in a hurry.

As you enjoy your slow-food experience, you’ll see divers heading down the curving terraced path to the lido. Occasionally, boats come in and out of the small harbor with divers, swimmers, and sightseers. Lounge chairs occupy terraces. Take a glass of wine, choose a lounge, and have a nap.

If you can’t make it to a lido, choose a sidewalk café anywhere on the island. Plan to spend at least two hours; it’s the Gozitan way.

Stop in at a food shop in any village. Buy prepared local delights like pizzette (Maltese pizza) or pastizzi (crisp, layered pastry with cheese or cheese and pea filling). Qassatas are English-style hand-pies. You’ll find pea, tuna, spinach, and chicken flavors. I tried the chicken flavor numerous times. The creamy filling has Middle Eastern spices and a touch of cinnamon. It is intoxicating.

Add local cheese, olives, fruit, wine, or beer. Then head to the beach or headlands for the best picnic ever.

Gozo’s coastline is dotted with watchtowers. The Knights of Malta built them as lookout posts during the 17th-century. The towers were positioned so each could see its neighbor to the right and left, creating a signaling network should invaders come in from the sea. Many of the towers still exist, but some of the structures were destroyed during World War II. Most aren’t open to the public for tours, but you can spend as much time as you like on the outside. All are located on spectacular points affording blue-ribbon photo-ops of the sea, tower, and inland Gozo.

This Gozo Coastal Walk guide shows the locations to all of Gozo’s watchtowers. They are marked ‘Fortifications’ on the map.

I’m a big fan of Hop-on Hop-Off tour coaches. It’s an inexpensive way to get the lay of the land in any city. On Gozo, it’s a must-do. I suggest boarding at the Mgarr Harbor Ferry Terminal. They are parked just outside the terminal building.

You exit the bus, enjoy the sites, and get back on when another bus stops. Double-decker hop-on-hop-off buses are open-air on the top level, providing 360-degree vistas. The tours have two routes, 14 stops, a narrated guide in 16 languages, and complimentary Wi-Fi. The $21 adult ticket is good for as many times hopping on and off as you wish. It’s good for 24 hours. The tours run every day except December 25th.

Each new conqueror left a mark on the country’s way of life. Gozo proudly embraces them all. Today Malta is a fascinating mélange of cultures that you taste in food and wine, see in architecture and art, or hear in music, language, and celebrations. Go to Gozo to immerse in it all.