You are here: Home / Ecuador / 12 Best Things to Do in Quito, Ecuador 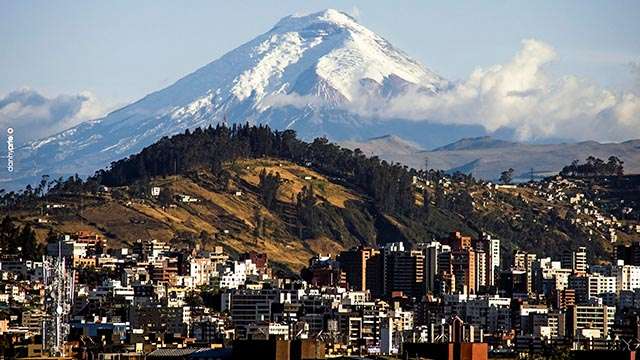 Ecuador, known for it’s serene landscapes and numerous places of total beauty, is home to some of the world’s most cherished locations… places like the Galapagos Islands, Amazon Rainforest, and namely the capital city of Quito.

High in the, South American, Andrean foothill, sits the beautiful city of Quito. Surrounded by mountains and volcanoes, Quito is the 2nd highest capital city in the world and was built on the historic remnants of an ancient Incan civilzation.

Quito has some of the largest and best-preserved historic sites in the world. If you’re planning a trip to this monumental city, here’s a list of the best things to do and sights to see in Quito.

Quito’s historic district was the first city named as a UNESCO World Heritage Site… recognized for having the best preserved, and least altered center in all of South America.

This district offers an amazing experience and insight into Ecuadorian culture. While you’re exploring through its narrow, busy streets, surrounded by 500 year old architecture, you can become fully immersed in Ecuador’s art, culture, and history.

While exploring unknown areas can be a bit stressful, especially if you are visiting Quito’s historic center for the first time, there are various plazas that can be used as reference points for exploring the city.

These plazas are similar to that of a town square… most feature churches, museums, galleries, restaurants and many shops.

Plaza de la Independencia is the central square of the city and one of the symbols of the executive power of Ecuador. Bustling with activity, the plaza is a staple of everyday life for thousands of locals.

The square, surrounded by four buildings, highlight the historical influence of both religion and government on Ecuadorian culture.

Plaza del Teatro, is home to one of the world’s most renowned theaters, Teatro Sucre. This beautifully designed theater has a long standing history in Ecuador.

Known for its collection of operas, Broadway Musicals, ballets, and other performances… attending an event here will surely leave a memory to last a lifetime.

Plaza del Teatro itself, like most other plazas, also features a variety of restaurants, cafes and shops.

Artisan Market by day, party central by night, Plaza Foch is a must go. Plaza Foch is always bustling with activity at any part of the day and can provide a truly memorable experience.

During the day, Plaza Foch has an artisan market, with loads of traditional Ecuadorian art and goods for sale. You can pick up beautifully handcrafted souvenirs and other goods to keep.

At night, Plaza Foch can be considered somewhat of a “red light” district. With dozens of hostels, restaurants and clubs all open until 2am or later, this lively part of the city doesn’t sleep until extremely late.

If you’re looking for an introduction to learn about the history and significance of Quito, the Museo de La Ciudad is a fantastic stop. Museo de La Ciudad features 10 exhibition halls, highlighting Quito’s history, going back since before the 19th century.

Across Quito, there are easily more than 50 different museums, all featuring different parts of the history and culture of Quito. Being a first time traveler, you can easily spend a whole day or longer just exploring the city.

La Mitad del Mundo, otherwise known as Middle of the Earth, is one of Quito’s most most famed tourist attractions.

During the 18th century, the French Academy of Sciences, carried out an expedition to determine the roundness of the Earth. These expeditions would be known as the “French Geodesic Missions.”

La Mitad del Mundo was originally deemed to sit on the center of the Earth by the French explorers. Unfortunately, their calculations were off by a couple hundred meters. Nevertheless, a monument was constructed to celebrate the first French Geodesic Mission.

Just located North of Quito, the area surrounding La Mitad del Mundo, is immersed in Ecuadorian culture… from shops and food to small museums elaborating on its history. La Mitad del Mundo is a must-see for anyone making their trip to Quito.

Basílica del Voto Nacional, the largest “neo-Gothic” Basilica in the Americas. This is truly one of the most intricate pieces of architectures in the world. Construction started in 1887 and still remains incomplete.

It has become somewhat of an urban legend among locals. It is said that once the construction of Basílica is completed, the end of the world will occur.

Regardless if you’re looking for history or simply just sight seeing, the Basílica del Voto Nacional will leave you in awe. If you’re not afraid of heights, some of its towers are more than 78 meters tall! Visitors are able to climb the towers and enjoy a breathtaking, panoramic view of Quito.

TelefériQo… a site that will allow you to grasp, just how large Quito actually is. TelefériQo is one of the world’s highest aerial lifts. The cable car ride takes about 20 minutes, brings visitors up 4,000 meters (12,000 feet) and provides remarkable views of Quito.

From some of its vantage points, you will be able to see Quito, the surrounding volcanoes and landscapes, in every direction.

At the very top of the of the cable line, you have the option to hike to the Pichincha Volcano, or simply enjoy a nice cup of coffee and food at one of the local cafes, while viewing the spectacular view that is Quito.

The Pichincha is an active volcano, visible from the center of Quito, and has peaks reaching as high as 4,700 meters! This is a major hike for any one seeking thrills and adventures.

In the center of Quito lies the large hill, El Panecillo and on top of this hill, Quito’s most historic symbols, “The Virgin of El Panecillo.” You may have even seen this location in a plethora of movies and shows.

Constructed in 1975, The Virgin of El Panecillo is a 41 meter tall, replica of a 12 inch structure made by Bernardo de Legarda in 1734. Drawing attraction from visitors all over the world, this statue is one of Quito’s most symbolic structures.

Local inhabitants say the statue faces north, blessing all who live there… with her back turned to the south, to signify the wealth inequality between the two sides of the city.

Surrounded by lushious trees and beautiful, old, architecture… El Panecillo is a place to look forward to visiting for any sightseer

If you’re looking for a truly one-of-a-kind experience, the Estadio Olímpico Atahualpa can provide just that.

Soccer (futbol) is HUGE in central America and is something like a national past time in Ecuador. Ecuador has displayed some of the most outstanding soccer talent that the world has ever seen.

Knowing this, fans are just as ecstatic about soccer events as the players. During games, this stadium is packed and displays such liveliness it’s mind-blowing.

If you’re looking to immerse yourself in Ecuadorian culture, make an event at Estadio Olímpico Atahualpa, a stop on your list… or simply just visit the stadium and bask in its glory.

Itchimbía Park (Itchimbía Cultural Centre) is located on one of the most important hillsides in Quito. Known for some its gorgeous views, overlooking Quito’s historic district, Itchimbía Park was a sacred site for civilizations of the past.

Itchimbía Park hosts several structures that have lasted hundreds of years, a landscape that contains multiple hiking trails and peaceful serene areas to relax. One of Itchimbía Park’s most notable structures is The Crystal Palace.

The Crystal Palace, built prior to the 19th century, is a glass and steel structure that is an architectural marvel. The whole area is a fantastic space for events, exhibitions and provides brilliant insight into the history of Quito.

The hillsides of Itchimbía Park span more than 100 acres and are home to more than 400 different flowers, birds and other wild life… all of this, right in the middle of a city.

Visitors are able to hike, bike or even rent horses to explore its beautiful landscape.

Cotopaxi is a popular stop for any climbing enthusiasts looking to scale the 5,000 meter mountain and is the 2nd highest point in Ecuador. The Cotopaxi National Park is also home to a massive variety of plants and animals, including pumas, bears and wolves.

Visiting Quito can be fun and exciting for anyone, however, like most places, there can be dangerous areas.

If you’re unsure, please look into hiring a guide to assist in your travels.