Visiting Czech Republic and looking for fun things to do? Look no further than Brno, countries second largest city after the capital Prague. Brno is located at the convergence of Svitava and Svratka rivers and is the traditional capital of medieval Moravia.

As a city rich in history and culture it is expected to have many captivating historical sites, but Brno also provides a fun and engaging tourist experience for all ages. We will go through castles, churches, parks, squares and recreational spots that you can’t miss out on.

Let’s take a look at the 17 must see places if you are visiting Brno.

Špilberk Castle is a gem of Brno. The construction of the castle began as early as the beginning of the 13th century in middle ages Moravia. From a major royal castle during the Austro-Hungarian rule it was transformed into the countries most notorious prison.

It is a seat of the Brno city museum and is considered the most visited place in town. It stands tall above the rest of the town surrounded by trees and remains a reminder of the towns rich history.

2. Cathedral of St. Peter and Paul

The Cathedral of St. Peter and Paul is considered one of the most important architectural buildings in South Moravia. It is located in the city centre on the Petrov hill. It combines the baroque and Gothic building stiles and its towers stand 84 meters tall.

It is really interesting that the bells of this cathedral ring at 11:00 every day instead of 12:00 like it is usually the case, The reason for this is that during Thirty Years’ War Swedes who were besieging the town said that they would call off the attack if the town didn’t fall until noon.

During battle, crafty Brno’s citizens rang the bells at 11 o’ clock and the Swedes gave up and left. Definitely an intriguing piece of history to check out.

Got tired of castles and historical buildings? Look no further than VIDA! Science Center as it provides fun for the whole family and especially children. It has more than 170 exhibits and can be found near the Brno trade fair complex.

You can launch rockets, temper with earthquakes and tornadoes and be a part of a TV weather report. It also has a section for younger children (2 to 6 years old) and can be a captivating new experience for everyone.

North of the city of Brno you can find the Punkva Caves, a cave system through which the Punkva river flows. As a part of this cave system there is also the Macocha Gorge with a sinkhole that is nearly 139 meter deep. It is the deepest of its kind in that part of Europe.

The cave is a very popular tourtist attraction and can provide a lot of fun for technical divers and cavers.

It is the largest Park in Brno and is the oldest park in the country. The park covers an area of more than 22 hectares which is the size of more than 40 football pitches! It is the best location to take a breather between sightseeing and take in the nature and peaceful environment.

At the first glance the villa looks just like any other older large house but when you scratch the surface of history it was a place of many important events.

It was built by Jewish German couple Fritz and Greta Tugendhat between 1928 and 1930. During World War II it was used as an apartment and office by the Gestapo and later, after the war, it was the quarters for the Soviet military. Also in 1992 this villa was the place in which the document that divided the Czechoslovakia into two republics was signed.

The Moravian Karst is located near the town of Blansko which is located to the north of Brno. It is a karst landscape and has around 1100 gorges and caverns. The Karst spans across an area of around 92 km2. At the moment, 5 cave systems are open for sightseeing.

It is a very popular tourist attraction and is flowing with people in the summer months. There is also a lot of hiking paths and bicycle trails to try out.

If you didn’t get enough of stone fortresses when you visited the Špilberk Castle have no worries, Brno has more to offer. Veveří Castle is situated 12 km from the town center, on the Svratka river.

It’s roots go all the way to the middle of 11th century, according to a legend. It provides a magnificent view of the river and the nearby forest. It is truly an oasis in which you can relax and take in the castles’ ambient.

For a little change of pace you can always visit the Brno Zoo. Who doesn’t like to see exotic animals as well as some of the local species which are characteristic for this region of Czech Republic. This zoo houses around 350 species of animals and it participates in captive breeding of some endangered species.

Located in the town’s historical center the Liberty Square is a must see for every visitor that comes to Brno. It’s packed with historical buildings and is close to many attractions that were already mentioned in this list. There is also the Dům Pánů z Lipé a hotel with a captivating facade. On the square you can also see Brno’s astronomical clock.

It is a black stone monument which releases 4 glass marbles every day at 11 o’ clock. Visitors can take this marbles home as souvenirs.

A more modern site of the town, Brno Observatory is a place for you if you are interested in astronomy and science in general. There is a lot of different exhibits to have fun with including Digital planetarium which takes you on a trip to the universe with a circular screen which has a 17 meter diameter.

There is also an Astronomical Observation Point which lets you use a telescope so you can see the nearby planets and the spots on the Sun with your own eyes!

Another structure that is intertwined with Brno’s rich history. Old Town Hall is no longer inhabited by the cities authorities and now it has an information center, a gallery and a permanent historical exhibition.

You can also climb the Town Hall’s tower, which stands 63 meters tall, and take a look at the whole city. Many festivals, concerts and performances are also held in the Hall’s courtyard.

This is certainly not your average market. Cabbage market in Brno hosts a lot of local sellers that offer a lot of fruit, vegetables, herbs and plants to the visitors. It has been in use as a food market for centuries.

There is a tour which you can take to explore the cellars which are between 6 and 8 meters below the market. The cellars have been used to store food and hide in the times of war during city’s past.

After a long day of walking what can be better than a wellness and spa center? Infinit Maximus provides it’s visitors with a much needed relaxation. Customers have access to thermal pools, massages and a sauna. It has 12 types of indoor and outdoor saunas. You will be able to experience an oasis of peace and get ready for another exiting day in Brno.

Another park, but, this time with a beautiful look at Brno and the surrounding area. This park is near the city’s centre, on the Petrov hill.

There is also an obelisk made in 1818 as a commemoration of the end of the Napoleon’s wars. A collonade with a fountain is also a beautiful piece of architecture. Park’s brand new appearance can be attributed to the renovation that was done in 2003.

Brno Reservoir is a dam on Svratka river on the outskirts of Brno. It provided city with water in the past, but now it is used to make electricity. The lake is used for recreation in leisure time. It is also very close to the Veveří Castle.

The dam can be visited during the whole year and it is really attractive for both locals and the visitors. It is surrounded by forest from both sides and swimming in the water is alowed and safe. Near the castle is also a bridge that is used by runners and cyclists.

Yet another beautiful building in the center of Brno, the Church of St. James can be found in James’ square. It was founded during 13th century for the German inhabitants. The church is categorized as a national monument since 1995. It is one of the many historical and religious monuments that you don’t want to miss out on.

More about the Czech Republic 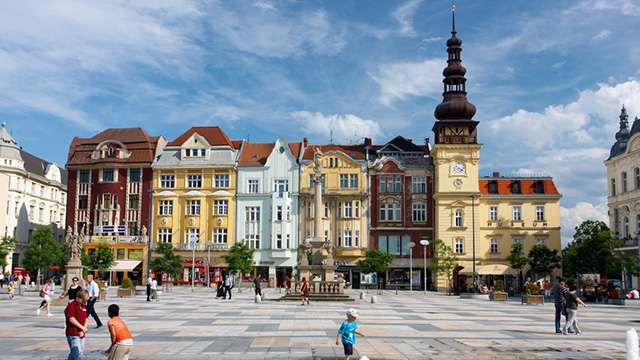