You are here: Home / Croatia / 9 Best Things to Do in Hvar, Croatia Hvar, Croatia is known for its natural beauty and is a paradise destination for travelers. Nestled along the Adriatic Sea, the area is often referred to as Croatia’s French Riviera. The city is filled with the signature red roofs, white-washed walls, and turquoise waters that the country is known for. With a Mediterranean climate, Croatia’s islands are immensely popular with tourists from all over the world, and the island of Hvar just happens to be the queen of these Dalmatian Islands.

With easy access by ferry from the mainland, Hvar is a must-see destination in Croatia. The island of Hvar is hands down the most incredible place I’ve experienced in my life. The city is bursting with glamorous hotels and upscale restaurants. It was like being transported into the life of the rich and famous. Unsurprisingly, many A-list celebrities have chosen to holiday on this little nirvana over the years. Why wouldn’t you like to vacation like Prince Harry, George Clooney, or even Jay-Z and Beyoncé?

Hvar is also famous for its wild nightlife. But the island of Hvar is so much more than just the glitz and glamor of the main town. If you’re looking to escape Hvar and explore some of the more authentic Dalmatian experiences on the island, there is so much to see and do.

St. Stephen’s Square, famous for being the largest plaza on the Dalmatian coast, runs all the way down to the harbor and is bustling with cafés and restaurants. The square is the perfect place to grab a bite to eat after you tour the cathedral.

2. Relax on the Beach

If you want to get off the beaten path, then you should certainly explore some of Hvar’s lesser-known beaches. If there’s one area Croatia does right, it’s their beaches, unrivaled for their views and crystal-clear waters. My favorite has to be Beach Fontana in Jelsa.

Jelsa is a small harbor town with intimate streets, restaurants, and a winery. With clear water and a pebble beach, Fontana truly is a little slice of heaven. For the most part, you’ll have this beach to yourselves as Jelsa isn’t a major tourist destination. What more could you want?

3. Witness the Views from Španjola Fortress

This is the most scenic view of Hvar, with red roofs and shimmering waters for miles. The Španjola fortress was built in the 13th century. In the 1500s it became a shelter for locals during a Turkish invasion while the rest of the town burned down. Currently, the fortress showcases historical tributes in its museum.

It is also very accessible. There are signs to direct you from St Stephen’s Square, in the center of Hvar. The entry fee is a cheap 40 kuna (about $6.50).

It’s no wonder Hvar produces such good wine with its ideal climate. Hvar is often referred to as the island of wine, with winemaking history back to 384 BC. Back then the wine was the island’s most valuable product.

Hvar’s top wineries are found in the picturesque villages of Svirče, Vrisnik, Vrbanj, Pitve, and Dol. Each offers great tours for the perfect day out.

A truly stunning piece of Renaissance work, the Venetian Loggia is worth taking time out of your schedule to visit.

A palace previously stood on these grounds but was later redesigned following damage during an attack in the late 1500s. The clock tower was added later during the 1800s.

Sunsets in Hvar are magnificent. Whether you choose to enjoy it over a delicious meal, some rooftop drinks, or lying in a hammock by the sea, you will not be disappointed.

The main characteristic of Dalmatian cuisine is freshness. Similar to the Italian cuisine, thin slices of Dalmatian prsut (prosciutto) are often starters. This is usually followed by meat or seafood dishes.

Dalmatian cuisine is usually not embellished with many spices, but as a typical Mediterranean dish, Dalmatian pâtés are rarely served without olive oil and fresh or dried herbs. Green and black olives and cheese are usually found with every meal.

Stari Grad Plain is a historical landscape that has remained mostly intact since it was colonized by the Greeks in the 4th century BC. Now one of the oldest cultivated plains in the world, UNESCO declared it a World Heritage Site.

Originally the economic activity on the plain was agricultural, and as you can probably guess, the main focuses were on grapes and olives. However, the site is also a nature reserve. The surrounding backdrop is filled with ancient stone walls and shelters displaying the history of the systems and land division schemes used by the ancient Greeks. It’s incredible how the site has remained virtually undamaged over its lifespan, roughly 24 centuries.

9. Experience the Blue and Green Caves by Boat

An absolute must-do experience is the Blue and Green Caves boat tour. Travelers have the option to hop on or off from island to island on this guided tour.

Tourists will get to see Ravnik Island, home of the Green Cave. The glow that shines through from the sun is a spectacular emerald color. You can also swim in this cave.

The Blue Cave is another stop on the tour. The second cave is on Bisevo Island, and as you approach you can check out the coast’s wild cliffs. This cave is famous for the mesmerizing blue light that fills it. This usually occurs when the sun hits the sea directly at the opening; the light reflects off the water and shines across the whole interior of the cave in an immaculate, iridescent blue shade.

The Easiest Way to Get to Hvar

The best way to get to Hvar is to travel from Split by ferry. The sail takes roughly an hour to an hour and a half. The ferry service operates year-round, with several daily ferries running directly. There are more ferries running in the summer months.

The ferry is relatively cheap, it costs just 27 kunas ($4). You do not need to book in advance, but it is recommended to ensure your place, especially during the busier summer months. 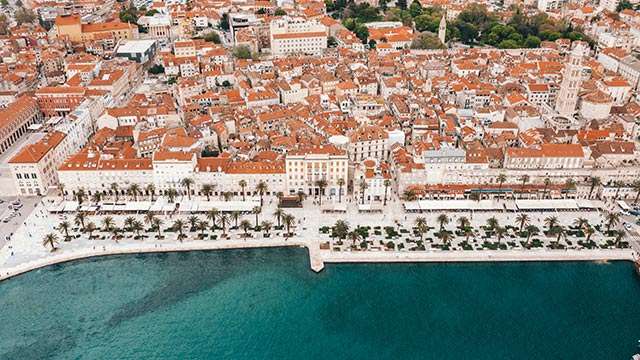